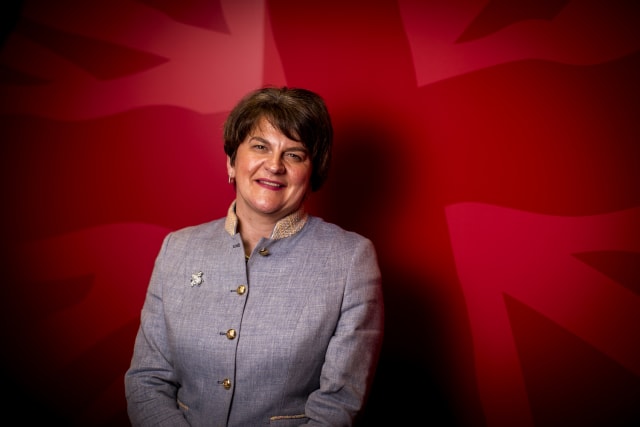 Arlene Foster has called for the resumption of negotiations with Sinn Fein after the General Election in a bid to break the Stormont impasse over the Irish language.

The DUP leader insisted the dispute, which she said centred on the “details” of proposed legislation, should not be allowed to prevent the restoration of the devolved institutions any longer.

In a wide-ranging pre-election interview with the PA news agency, Ms Foster also:

– criticised Sinn Fein’s failure to condemn the attempted murder of her father during the Troubles;

– said a poll on Irish unity would reinforce Northern Ireland’s position within the Union, but would also trigger a seven-year cycle of uncertainty;

– expressed fears the Prince Andrew controversy could have damaged the royal family if he had not stepped away from public life;

– accused Labour MP Stella Creasy of attention seeking after she criticised a reference to her in a DUP policy pledge on protecting the unborn.

The Irish language stand-off remains the main obstacle in the way of a return to powersharing.

Sinn Fein has insisted it will not return to a coalition with the DUP until there is agreement to pass a stand-alone Irish Language Act.

The DUP has said it is willing to agree legislative protections for Irish speakers but only as part of wider cultural laws that would also include British and Ulster Scots traditions.

Ms Foster said her approach was the “right way forward”.

“There are many people in Northern Ireland who love the Irish language, and we have no desire to put a barrier up to them accessing public services,” she said.

“And therefore we believe there’s ways of doing that through legislation and, indeed, through facilitation, and we can do that – that’s not a problem.

“But why are we holding up the Assembly while we’re trying to work out the details of all of that?”

She reiterated her proposal to restore the Assembly and set up a parallel process to find a resolution to the language dispute.

Ms Foster’s party last week published a 12-point plan aimed at tackling some of the issues created by the devolution crisis.

She said “all roads lead back to devolution” and noted that Sinn Fein leader Mary Lou McDonald had signalled a desire to return to Stormont at her recent party conference speech.

“I hope that she does want to see devolution returned because I certainly do,” she said.

“But I can’t move anywhere without the co-operation of the other parties. And therefore, if we’re genuinely wanting to move Northern Ireland forward, which of course I am, let us get into those negotiations after the General Election is over and let’s get devolution back again.”

However, Ms Foster also criticised Ms McDonald for declining to criticise the attempted murder of her late father John during the Troubles.

The DUP leader had accused Sinn Fein of being selective on what it will condemn, after it criticised loyalist banners targeting its election candidate John Finucane.

She had asked would it also condemn the IRA attempted murders of her father and of DUP deputy leader Nigel Dodds.

Ms Foster responded: “Of course all right-thinking people would condemn the attempted murder of two fathers.

“I mean, I don’t think that that’s something that should have caused any great difficulty but unfortunately Sinn Fein have taken up the usual position in relation to that.

“When someone comes to your home, to try and murder you, it needs more than regret, it should be condemned outright.”

In 2013, Ms Foster suggested a unity poll would help to validate Northern Ireland’s position in the United Kingdom.

Asked if that remained her view in the context of the renewed focus on unification as a result of Brexit, she said: “I have to say I think it would reinforce our position within the Union because clearly we would win that unity poll.

“I think the unfortunate thing is under the Belfast (Good Friday) Agreement, there is the capacity to call that unity poll every seven years then after that, and I think that would be hugely destabilising. Because you’re just working in seven-year cycles then to the next unity poll and the next unity poll.”

Ms Foster said she had been “saddened” by the fall-out from the controversy around Prince Andrew and his links with convicted sex offender Jeffrey Epstein.

“I have been saddened principally for Her Majesty the Queen, and that she’s having to deal with this issue,” she said.

“And I think it’s right that Prince Andrew has decided to step aside from public life and allow the other royals to take on the burden because it was just becoming too big of a story for the royal family.

“I didn’t see the (BBC Newsnight) interview, I’m just reacting to what has been said since then and obviously picking up on the news items, but it certainly had become a furore and I think it was going to overtake the monarchy if something wasn’t done. I think the right decision was taken.”

Last week, Labour’s Stella Creasy accused the DUP of dehumanising her and making her a target for abuse.

Her comments came after the DUP’s 12-point plan called her “Creasy”, without a prefix, in reference to her role in decriminalising abortion in Northern Ireland.

The Labour candidate, who accused Ms Foster of trying to scare women in the region, was at the forefront of legislative moves at Westminster that led to the landmark law change.

“To be honest with you, I thought it was just her trying to get attention, because I’m called ‘Foster’ all the time,” she said.

“I mean there was certainly no attempt to dehumanise anybody. It was just political language that’s used all the time.”