Timeline of Duke of York’s week to forget 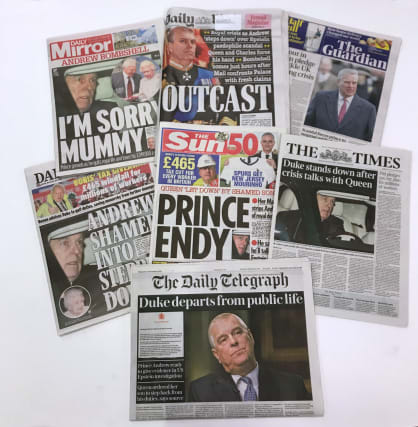 Queen Elizabeth famously referred to 1992 as an annus horribilis, using the Latin for horrible year.

But for Prince Andrew, the recent past might be considered a septimana horribilis.

On November 24, 1992 The Queen gave a speech at Guildhall to mark the 40th anniversary of her accession to the throne:

“1992 is not a year on which I shall look back with undiluted pleasure,” she said. “In the words of one of my more sympathetic correspondents, it has turned out to be an annus horribilis.”

The events leading to her declaration included:

March 19 – separation of Andrew, from his wife, Sarah, the Duchess of York

June 8 – publication of Diana, Princess of Wales’s book Diana: Her True Story, revealing the problems in her marriage to Prince Charles, including his affair with Camilla Parker Bowles

August 20 – publication of photographs of the Duchess of York sunbathing topless with her friend, John Bryan

August 24 – publication of intimate conversations between the Princess of Wales and her friend, the actor James Gilbey, from a tape recording of their phone calls

November 20 – a fire in Windsor Castle, one of the Queen’s official residences

December – separation of the Prince and Princess of Wales

The events of Andrew’s 2019 septimana horribilis have included:

Friday, November 15: The BBC releases advance clips of an interview Prince Andrew recorded with Emily Maitlis for Newsnight. Among the extracts was one of Andrew saying his friendship with convicted paedophile Jeffrey Epstein had “let the side down”.

Saturday: The full BBC interview is shown. The prince denies having sex with 17-year-old Virginia Roberts in London in March 2001, saying he had taken his daughter to Pizza Express in Woking, Surrey and went home afterwards, not to a nightclub in London.

Sunday: Lawyers for Epstein’s victims criticise Andrew for not showing any sympathy for them, and call for him to speak to the FBI.

Monday: Businesses, charities and universities begin to cut ties with the prince.

Tuesday: A question about whether the monarchy is “fit for purpose” is asked during a televised election debate between Boris Johnson and Jeremy Corbyn. This is said to have been the final straw for some in the royal family.

Wednesday: Andrew issues a statement saying he is stepping back from public life, with the Queen’s approval.

Thursday: The prince cancels a planned junket to Bahrain in the Middle East. Lawyers for Epstein’s victims say they plan to subpoena Andrew to be questioned under oath.

Friday: The Queen is pictured horse riding with Andrew – long said to be her favourite child. But the Royal Philharmonic Orchestra and English National Ballet parted company with Andrew, who had served as patron. The prince also reportedly resigns from his role with his flagship business project Pitch@Palace.