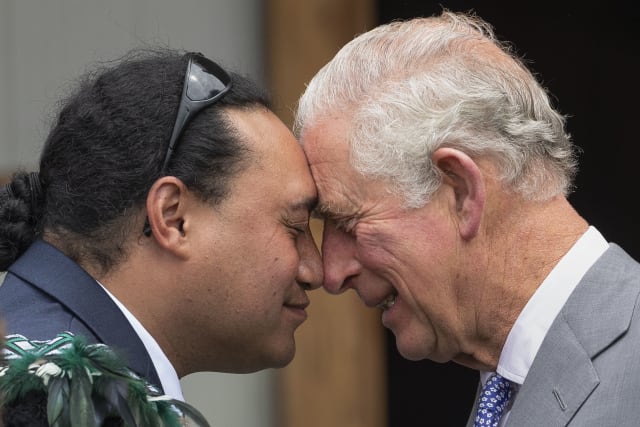 The Prince of Wales got up close and personal with a pair of llamas during his last day in New Zealand – and was also taken by some displays of horse power.

Charles and Camilla began the day in Christchurch, visiting the Lincoln Farmers and Craft Market before the prince took a helicopter north to Kaikoura.

The town of around 2,000 people was struck by a 7.8-magnitude earthquake in 2016, and the prince met people who were among the first responders on the evening the tremor struck.

“I’m joining the line again,” one of the coastguard team said as she went for a second handshake, to which Charles joked: “You must be a glutton for punishment.”

It was outside the Kaikoura Memorial Hall where Charles was introduced to Legend and Max, a pair of llamas who work giving rides in the town.

Charles laughed as the llamas were ushered into place for a picture, with Kevin Cole of Kaikoura Llama Trekking saying he purposely chose the best-behaved pair for the royal visit.

“When I knew he was visiting, I had to make sure I chose the best llamas from a characteristic and placidity point of view,” he said.

“I was very impressed by how much he knew about them too.”

Hundreds of people came to see Charles as he completed a walkabout in the town centre, shaking hands and greeting locals as well as those who said they were from Bath, Manchester and Italy.

It was also during the visit to Kaikoura Square that the prince met the White Ribbon Riders, who are taking part in a motorcycle tour in support of programmes against domestic violence.

Charles was heard to joke with rider Tiki O’Brien that it looked like a Hell’s Angels chapter as the riders showed off their Harley Davidsons, Hondas and Triumphs.

Eru Whare told the prince: “I can see you riding one of these,” which raised a smile from the royal.

Charles went on to visit Hutton’s Shearwater Colony, one of two breeding colonies for the endangered seabird in the area.

Ted Howard, chairman of the Hutton’s Shearwater Charitable Trust, opened an artificially created underground burrow to show Charles one of the birds, the only seabird in the world to breed in an alpine environment.

“I’ve lost quite a lot of blood to these,” he joked as he held the bird while Charles stroked it.

Charles’s last engagement on the New Zealand leg of the tour was a picturesque coastal walk in Kaikoura.

He stopped and took in the views of the Kaikoura ranges and looked out to the Pacific Ocean.

The prince, led by Phil Bradfield and Rawiri Manawatu, spent around 30 minutes walking along the coast, with seals and blue penguins visible from the path.

He will now travel to the Solomon Islands for the last leg of the tour.