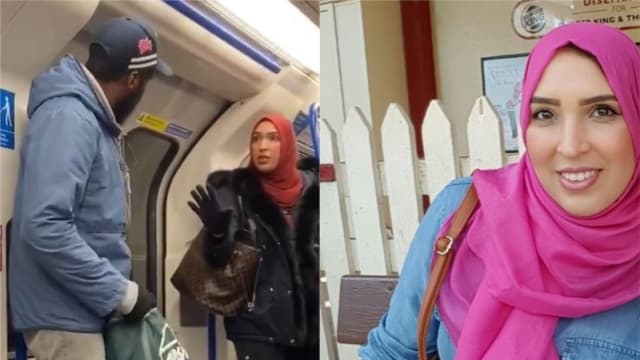 A mother-of-two who confronted a man directing anti-Semitic abuse towards Jewish children on the London Underground said she “wouldn’t hesitate to do it again”.

Asma Shuweikh, from London, told the PA news agency she wished more people on the Tube had stood up the man when he started being aggressive towards the young family.

She said: “I would have loved more people to come up and say something, because if everyone did, I do not think it would have escalated in the way that it did.”

The police are now investigating after a man was filmed reading anti-Jewish bible passages to two young boys in skullcaps while they were travelling with their family on the Northern Line.

Wearing a cap and hoody, the man is seen in the video threatening a man off-camera after he tries to intervene before a woman in a hijab — Asma — confronts him.

She said when she saw what was happening she knew she “had to confront him”.

She said the couple was travelling with three children, and she wanted to deflect the man’s attention away from them.

She said: “He was quite aggressive and was getting in my face.”

Fellow commuter Chris Atkins took the video after catching the Tube heading south on the Charing Cross branch of the line at midday on Friday.

“The Muslim woman didn’t take any shit from him and really, really took him to task, very firmly and persistently,” Mr Atkins said.

“In this day and age we are told how intolerant everyone is and all religions hate each other and there you had a Muslim woman sticking up for some Jewish children.”

Mrs Shuweikh said she got off the Tube after two stops and did not realise the video was going viral until a friend texted her to say she had seen her on Twitter.

She said: “It was so heartwarming to see the responses and see what people were saying. I can’t take all the credit because a lot of other people were involved.

“I would not hesitate to do it again.”

In a statement, the British Transport Police said: “We are aware of a video circulating on Twitter which shows passengers being harassed and being targeted with anti-Semitic abuse on a Northern Line train.

“Enquiries are being made in relation to this footage.