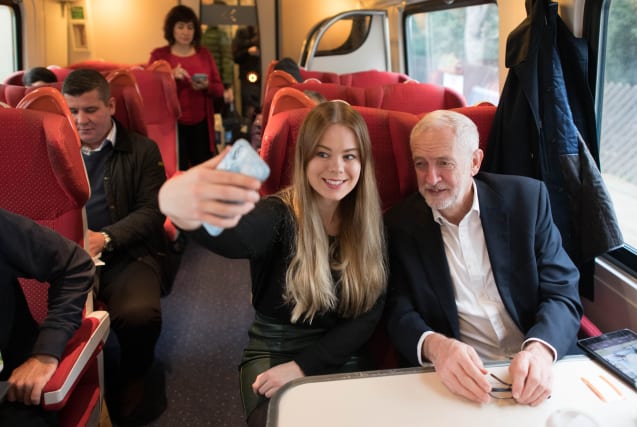 Labour leader Jeremy Corbyn has defended his decision to remain “neutral” in a second EU referendum as Liberal Democrat leader Jo Swinson called him a “bystander” on Brexit.

Meanwhile, the Conservatives pledged to double dementia research funding over the next decade.

Here are some of the highlights of Saturday’s campaign trail:

The Labour leader defended his decision to adopt a neutral stance in a future Brexit referendum as “a sign of maturity”.

Mr Corbyn said: “I think being an honest broker and listening to everyone is actually a sign of strength and a sign of maturity.”

He added that he believes his position is “a sensible way forward that can bring people together”.

– Members of the other parties criticised Mr Corbyn’s Brexit position

Liberal Democrat leader Jo Swinson branded Mr Corbyn a “bystander” on Brexit after his pledge to take a neutral stance in another EU referendum.

Ms Swinson said Mr Corbyn’s decision to remain neutral was “astonishing” and accused him of showing “an absence of leadership”.

The Tories promised to double dementia research funding over the next decade by putting an extra £83 million a year into the cause.

Health Secretary Matt Hancock said that as well as increasing spending the Conservatives would “double” government research and work to “galvanise” scientists and research companies.

The plans would see more than £1.6 billion invested over the next decade to find a cure for dementia, and would be spent on increasing the number of clinical research academics and researchers studying innovative techniques.

Mr Corbyn offered students a vision for “hope” as he unveiled a youth manifesto pledging £1 billion investment and votes at 16.

In the youth manifesto, Labour pledge to spend £1 billion each year to fund a service guaranteeing every young person access to work and an additional £250 million to build up to 500 new youth centres.

Among the policies included in the document are ending tuition fees, bringing back the maintenance grant and free bus travel for under-25s.

– The Liberal Democrats promised to boost creative subjects in schools

Liberal Democrat leader Jo Swinson called for creative and arts subjects to get “the same footing as the rest of the curriculum”.

In their manifesto, the party said it would spend £10 billion a year more on schools by 2024-25 and employ 20,000 extra teachers, including in creative subjects.

Ms Swinson said a Liberal Democrat government would “reverse the trend of creativity being squeezed out of the classroom” and would create an independent, expert-led body to pilot and phase in future curriculum changes in all state schools with input from teachers.

Labour leader Jeremy Corbyn received huge applause when he told supporters at Loughborough University on Saturday of plans to end pay “discrimination” and give a £10 minimum wage to all.

In an attempt to energise his campaign and woo students, he encouraged the crowd to hit the streets campaigning ahead of the December 12 election in order to bring about a “red Christmas”.

Video round-up of the day on the election trail

Jeremy Corbyn’s comments regarding his “neutral” stance on a second Brexit referendum were the main talking point on the various campaign trails around the country.