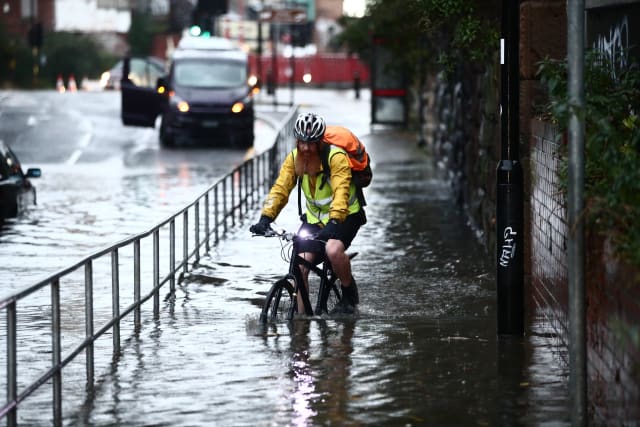 The Met Office has issued four weather warnings across the UK for Saturday, including parts of north-east England where heavy flooding has caused significant disruption in previous weeks.

Heavy and persistent rain is due to start in south-west England from 12pm on Friday and last until 6pm on Saturday – meaning a deluge for roughly 30 hours.

About 20-30mm of rain is expected widely in the region, though the up-slopes of Dartmoor in south Devon could see 40-50mm of rain.

The average rainfall for Devon and Cornwall during November is roughly 135-45mm.

Yellow warnings have also been issued in north-eastern England and parts of Scotland, which will also be hit with continuing wet weather throughout Saturday.

A spokesman for the Met Office added that areas such as Derbyshire and Nottinghamshire will see persistent rain arriving from the south early on Saturday morning, which will last through most of the day.

According to the Met Office, rain will be heavy at times, especially on hills where the rainfall could also reach up to 40-50mm.

The region is still recovering from heavy flooding that caused devastation in many communities in the last two weeks.

Met Office data up to November 17 shows that Nottinghamshire has seen the most rain of all UK counties compared with the average, having seen 189% of its monthly average already.

There are currently 45 flood alerts and six flood warnings in place that have been issued by the Environment Agency.

Four of the flood warnings are in the North East.

Wet weather is also expected to develop across north-eastern Scotland from Saturday afternoon.

The Met said that general rainfall of 20-40mm was likely through Aberdeenshire, and areas of high ground could reach 60-80 mm in addition to thawing snow.

Johnson warns tiered restrictions will need to continue despite vaccine

Labour will back Government messaging on vaccine rollout to offer ‘confidence’