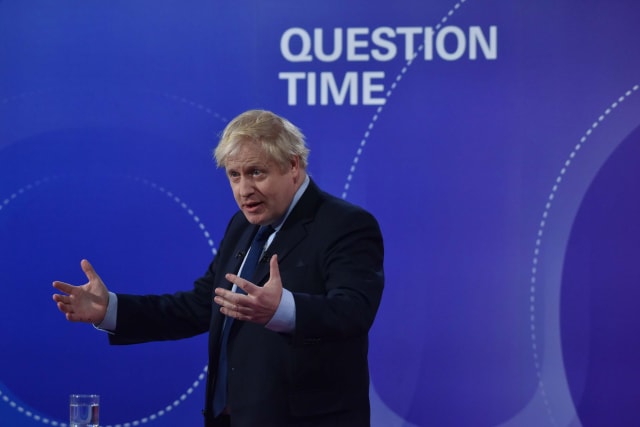 Jeremy Corbyn insisted he would take a “neutral stance” in an EU referendum under Labour while Boris Johnson was challenged over “racist rhetoric” and trustworthiness during a brutal televised grilling.

The leaders of the four main Westminster parties faced a tough half-hour grilling from a live audience on a BBC Question Time special on Friday evening.

They will be on the road on Saturday trying to move the spotlight back onto safe ground, with the Prime Minister announcing a £1.6 billion fund to find a cure for dementia and the Labour leader launching the party’s youth manifesto.

Mr Johnson said the investment would double current funding levels and the Tories said it would set Britain’s finest scientists to work on a “dementia moonshot”.

Labour will launch a document called “The Future is Ours”, in which the party will commit to giving 16-year-olds the right to vote, and to investing an additional £250 million to build up to 500 new youth centres.

The Labour leader will also visit an Amazon depot in Yorkshire where he will vow to tackle the “tax and wage cheat culture” of multinational companies who “rip off” workers.

Meanwhile, Liberal Democrat Leader Jo Swinson will be in West London focusing on creative and arts subjects in schools, which she said should have “the same footing as the rest of the curriculum”.

Brexit Party leader Nigel Farage will be on a walkabout in Hartlepool, where party chairman Richard Tice is a candidate.

On Friday evening, Mr Corbyn made his clearest comment to date in the Sheffield studio on how he would act in another referendum, which Labour plans to hold between a new deal and the option to Remain within six months of taking power.

Having been asked how anyone could vote Labour without knowing what outcome he would campaign for, Mr Corbyn said he would start by negotiating a “credible” Leave deal before he was interrupted by laughter.

“And I will adopt, as prime minister, if I am at the time, a neutral stance so that I can credibly carry out the results of that to bring communities and country together rather than continuing an endless debate about the EU and Brexit,” he continued.

Host Fiona Bruce pressed Mr Corbyn, asking if he would not pick a side in another referendum, as she brought his time to a close.

The Prime Minister refused to apologise over his use of language and defended Tory austerity as Mr Corbyn came under fierce scrutiny from voters when he was questioned over fears for businesses, anti-Semitism, misogyny, freedom of speech and Scottish independence.

He was asked to apologise and admit he had personally contributed to “racist rhetoric” during his journalistic career.

Mr Johnson said he “genuinely never intended to cause hurt or pain to anybody and that is my intention”.

But the audience scoffed when he added: “If you go through all my articles with a fine-tooth comb and take out individual phrases, there is no doubt that you can find things that can be made to seem offensive and of course I understand that.”

One junior doctor accused him of “lying to us” as she challenged the Tories’ record on the NHS, while another voter questioned whether he could be trusted.

In his response, Mr Johnson was met with groans when he said the NHS’s demands could only be met when “we get Brexit done”.

He was also challenged over levels of child poverty and how many new hospitals the Tories were planning to build after the scheduled number dropped from 40 to six.

Liberal Democrat leader Jo Swinson denied treating voters as “stupid” over her plans to revoke Article 50 and cancel Brexit without another referendum.

“I don’t think you can accuse us of not being upfront about wanting to stop Brexit. We’ve been crystal clear about that from the very beginning,” she said.

SNP leader Nicola Sturgeon cast doubt on Mr Corbyn’s stance of not allowing another independence referendum in the early years of an administration under his leadership.

She suggested he was not “going to walk away from the chance to end austerity”, and added: “I’m not sure he’s going to compromise the chance to have a Labour government for that issue.”

The audience was made up of around 150 people who, according to the BBC, were roughly equally split between Conservative and Labour supporters, with a smaller number for the Liberal Democrats and SNP.

There was a slim majority for people who voted Leave over Remain, except for some who were too young to vote at the last election, the broadcaster added.