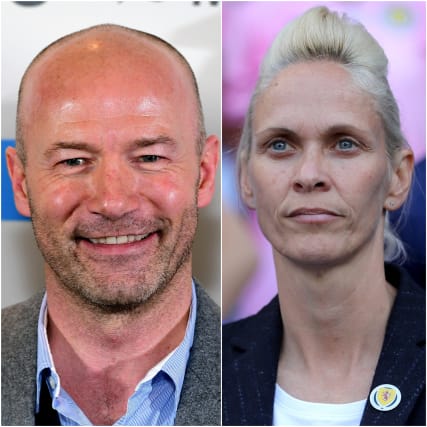 Famous football faces Alan Shearer and Shelley Kerr have been awarded honorary doctorates by the University of Stirling.

The pair were recognised on Friday at graduation ceremonies along with 1,400 students.

Ex-England and Newcastle United striker Shearer was recognised for his outstanding contribution to football and dementia awareness, having fronted a documentary in 2017 investigating the risks posed by heading in the sport.

After receiving the accolade from university principal and vice-chancellor Professor Gerry McCormac, Shearer paid tribute to the efforts of the research community on the issue.

He said: “I am deeply honoured to receive this prestigious recognition from the University of Stirling – and accept it on behalf of the team I worked with on the recent work exploring the risks posed by heading footballs.

“I am passionate about this vitally important area of research and delighted to see Stirling leading the way in attempting to address the concerns of the football community.

“I would like to congratulate all of those graduating from the University of Stirling today – it is great to see their hard work and dedication rewarded and I have enjoyed celebrating alongside them.

“I wish them all the best as they move on to the next chapter of their lives.”

Kerr managed the University of Stirling men’s first team in 2014, becoming the first woman in the UK to manage a senior men’s side.

This year, she led the Scotland women’s national team in their first appearance at a World Cup.

Kerr, who graduated with an MSc Sport Management from Stirling in 2016, said it was “a great honour to be the recipient of this award”.

She added: “My time at Stirling was one of the most challenging and rewarding experiences in my personal journey to date.

“The university prides itself in developing people, sporting excellence, equality and diversity and it was a privilege to be offered a unique opportunity to excel in academia and sport.

“The university’s forward-thinking epitomises its core values – and I’m absolutely thrilled to be an ambassador for the students.

“This is a very special moment and humbling to be honoured at an educational establishment that has played a major role in my career development.”