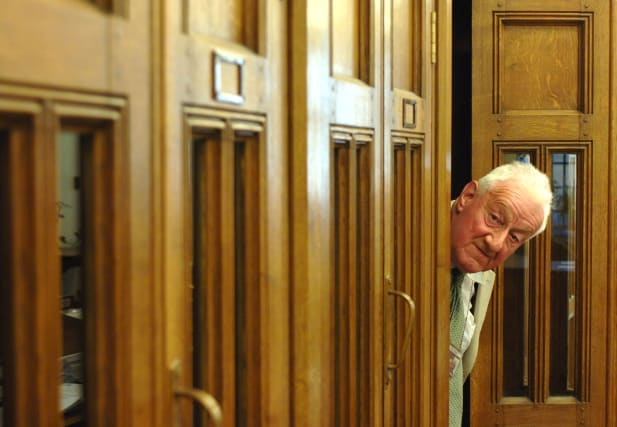 Chris Moncrieff, political editor and writer for the Press Association for many years, was much more than a legendary figure among fellow journalists and politicians.

He was also declared by a British prime minister on the Great Wall of China to be a “national treasure”.

Sir John Major made the announcement to bemused Chinese government figures after saving Moncrieff from falling on a steep slope.

“His feet were out of control in the way his pen never is. He headed irresistibly towards the edge of the Great Wall and the drop over the side.

“I put out my arm to steady him and the great man was preserved for posterity.”

The then Mr Major may have embroidered the anecdote in a style resembling Moncrieff in his lighter stories.

Margaret Thatcher, a great admirer, appointed him a CBE in the 1989 New Year Honours – a rare distinction for a reporter.

Tony Blair, speaking to an audience of politicians and journalists, said as a young MP he soon realised that “Moncrieff was the gateway to the nation … the one journalist who mattered”.

When he retired as PA’s political editor in 1994, the BBC and ITV ran stories on him.

He was invited to give a valedictory address at the Labour Party conference, where he reduced some leading figures to tears of laughter.

There were also newspaper features and 123 MPs tabled a Commons motion recording his “enormous contribution to reporting politics and the proceedings of this House”.

It was the shortest retirement on record. Next day, Moncrieff was back at his PA desk.

Although no longer in the Westminster front line, he continued to pour out a stream of profiles, background stories and analysis that enhanced the PA service.

For the first time he expressed his own views in a weekly column, published in many regional newspapers, that frequently lambasted politicians of all parties. He also embarked on a new career as broadcaster and TV personality.

“I can be quite outrageous,” he told friends delightedly.

But the sentiment would have been echoed by rival reporters, who Moncrieff often scooped but never alienated, by politicians of every hue and by his colleagues at the Press Association, the national news agency, to whom he was simply their greatest journalistic asset. His stentorian tones, rugged features and vast store of Parliamentary anecdotes became familiar to viewers and listeners.

When John Profumo died, Moncrieff spent a morning rushing between TV and radio studios, giving a first-hand account of the dramatic scenes when the minister confessed to the Commons that he had lied over his affair with Christine Keeler.

In his prime Moncrieff made workaholics look like couch potatoes.

An 18-hour day, seven-day week was his norm.

He took just a fortnight’s holiday a year – in Hunstanton on the Norfolk coast. But if a news story broke anywhere nearby, the break would be duly interrupted.

His file of cuttings in the pre-internet PA news library was fatter than that of many of the figures he had written about.

He would begin filing political stories to PA from his home around 7am, arrive at Westminster soon afterwards, cover the day’s most important political stories plus a few light-hearted ones and seldom leave for home before the last few MPs.

He never complained when his few hours’ sleep was interrupted by a call from some minister or MP. After all, he exhorted all new MPs to phone him any hour of the day or night if they had a story.

Accuracy, speed and balance – the PA imperatives – were sacred to him. An immaculate shorthand note meant his accuracy was never successfully challenged.

His speed at rapping out a PA news alert with the bare bones of a major story, followed immediately by the full version, often put the agency vital seconds ahead of rivals, with the PA story reaching newspaper offices before their own reporters had started filing.

MPs were keen to oblige as his assistants: he was way ahead of rivals on the leadership ballot which led to Mrs Thatcher’s overthrow because a Labour MP was holding the nearest phone open to his newsdesk.

His style was classic news reporting: the most important fact and best quotes in the first few paragraphs, the details stated clearly and simply, quotes in direct speech and any interpretation clearly defined.

Tatler, the magazine for society’s dedicated followers of fashion, turned its attention to Moncrieff in 1985, describing him as “the man who launches a thousand stories”.

“It’s old-fashioned journalism… Nothing is concealed in the trendy jargon of the pseudo-sophisticated Lobby correspondent,” it read.

“He writes down words and sends them off down the wire, unconcerned with making great judgments. In an age of commentators, he is a reporter.”

There was no gloss or slant.

Even his closest colleagues never knew Moncrieff’s own political views – he would probably have cast his vote for the candidate or party which provided the best stories.

He was unfailingly courteous.

“I like to give the impression I agree with everyone,” he said.

“I don’t think you get the best out of people by asking them hard questions – all I want is to get the stories out.”

Ministers and MPs knew that if they gave Moncrieff a story, within minutes it would reach newspaper, radio and TV newsrooms throughout the country and maybe the world via the PA service.

The combination of his own industry, integrity and the PA network brought him many exclusives – rarely acknowledged by national newspapers who used them under their own by-lines.

He was the undisputed master of the political offbeat story.

Moncrieff’s menagerie of backbench MPs, always ready to respond to his call for “a few of the well-chosen” on a topical issue, was a Westminster institution.

They knew they would get publicity – and Moncrieff got his story.

Some reached the top: Lord Tebbit, then Moncrieff’s own MP for Chingford, met him regularly in the Royal Oak, opposite the reporter’s modest terraced home. And Mr Tebbit granted Moncrieff an interview as he recovered in the Royal Sussex Hospital following the IRA’s bombing of the Grand Hotel in Brighton in 1984.

The late Geoffrey Dickens eagerly accepted Moncrieff’s suggestion he take up the paedophile issue in parliament, but knew so little about it that he referred to “Fidopiles”.

Moncrieff was genuinely modest but never fawned over or flattered politicians.

And although generally benign in his attitude to others, he had a way of paying off scores.

Holding that one senior politician had let him down by questioning one of his stories, Moncrieff bided his time.

When the same politician developed a habit of missing the train while on a whistle-stop tour, he made sure everyone got to read about it.

Described as “the man with the lived-in face and slept-in suit”, he cut a distinctive figure at Westminster and when accompanying prime ministers around the world, pockets stuffed with notebooks, bundles of newspapers under his arm.

On his appointment as PA’s chief political correspondent in 1980, The House Magazine, the weekly journal of the Houses of Parliament, wrote: “He is a one-man dynamo for whom news is food and drink is Guinness.”

US general Al Haig broke off in the middle of a news conference during the Falklands crisis to stare incredulously at Moncrieff’s crumpled trousers.

“Where did you get those pants?” he asked.

“From a pants shop of course,” Moncrieff retorted.

For many years Moncrieff existed on a diet of draught Guinness. A group of MPs presented him with a framed share in the company to acknowledge his contribution to its profitability.

There were even rumours that a supply was smuggled into Saudi Arabia during a visit.

But in 1983, in a Road to Damascus conversion, he switched to lemonade and food.

His explanation was that to enliven a Labour Party conference in Blackpool he popped into a clairvoyants’ gathering for a reading of new leader Neil Kinnock’s future.

“Madame Fifi looked at me and said: ‘I’ll tell you this for nothing – if you don’t give up drink you’ll be dead within a year’,” was his version.

It was probably the one time in his life Moncrieff took medical advice.

Other journalists regarded him with a mixture of affection, respect and even awe.

Invited to give the address at a memorial service in St Margaret’s, Westminster, for the political editor of The Sun, Moncrieff decided to tell anecdotes about the stories they had covered together.

Soon the congregation was roaring with laughter.

A group of Italian tourists, barred from entry because a memorial service was in progress, asked: “How can that be? Everyone is laughing.”

At the end, Kelvin McKenzie, famed Sun editor, asked Moncrieff: “Can I book you for mine?”

He was embarrassed but pleased by the praise of his peers.

Simon Hoggart wrote in The Guardian: “Now and again wealthy newspapers would try to tempt him, but he knew that PA, which reaches every corner of the British media in minutes, was the only place for his talents. We are all immensely grateful.”

Brian MacArthur said in The Sunday Times: “Moncrieff is one of the most remarkable journalists in Britain, a political reporter whose work appears, usually uncredited, in more than 100 papers every day.”

David Chipp, the PA Editor-in-Chief who promoted him to political editor, said: “A great reporter.”

Despite his supposed retirement, Moncrieff, remained a familiar face at Westminster and in 2007 a new catering area was named after him. The then 75-year-old said he was “hugely honoured” that the media bar and food area was to be called Moncrieff’s when it reopened after being refurbished.

He said he was “tickled pink” at the prospect of seeing his name immortalised in the watering hole.

Christopher Wighton Moncrieff was born on 9 September 1931. He decided on a career as a journalist when other small boys were dreaming of being engine drivers.

He spent a frustrating spell in a London solicitor’s office before he landed his first job on the local paper in Harrogate.

After National Service as a lance-corporal in the Intelligence Corps he worked on the Coventry Evening Telegraph and the Nottingham Evening Post.

He spent some time in France working at a fairground in Paris, a factory in Lyon and as a part-time English teacher.

His adventures there, related over “a modest half”, seemed straight from the pages of Clochemerle.

He joined the PA Parliamentary staff in 1962. A year later he was sent to cover the Great Train robbery.

Such was his dedication to the story that when police appealed for information about anyone who had gone missing around the time of the heist, his name was proffered by a neighbour.

Moncrieff was appointed a lobby reporter in 1973 and chief political correspondent (later political editor) in 1980.

His late wife of many years, Margaret – “my good lady Maggie” – coped with unending cheerfulness with his workaholic lifestyle and the stream of telephone calls.

They had four children.