The Pacific people of Bougainville will on Saturday begin voting in a referendum to decide if they want to become the world's newest nation by gaining independence from Papua New Guinea.

The referendum will run over two weeks and is a key part of a 2001 peace agreement that ended a civil war in which at least 15,000 people died in the cluster of islands to the east of the Papua New Guinea mainland.

Experts believe the 250,000 people of Bougainville will vote overwhelming in favour of independence ahead of the other option, which is greater autonomy, but the vote will not be the final word. 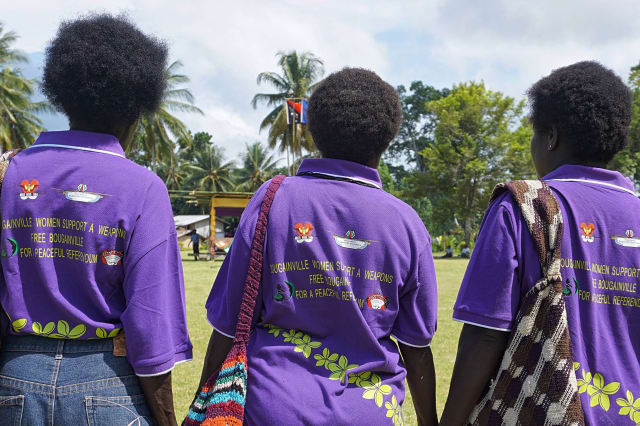 Gianluca Rampolla, the UN resident co-ordinator in Papua New Guinea, said the world body has been working hard to ensure the vote is peaceful, transparent, inclusive and credible. He said there are 40 UN staffers on the ground and more than 100 international observers.

He said he thought it unlikely there would be violence during voting.

"They've been waiting 19 years for this historic moment," he said. "I think they will be left with joy."

Just over 200,000 people are eligible to vote in the referendum, with the results due to be announced in mid-December. Mr Rampolla said the extended voting period of two weeks was due to the region's rugged terrain.

John Momis, the president of the Autonomous Region of Bougainville, told reporters on Friday the region stood on the verge of a new socio-economic and political order.

"We are trailblazers forging a new path into the unknown with the sheer determination to face any challenge that comes our way," he said. "We will face this together as one people and one voice to decide our ultimate political future."

In his weekly column in the Post-Courier newspaper, Papua New Guinea Prime Minister James Marape said complex discussions and negotiations would need to take place after the referendum before a political settlement could be reached.

The violence in Bougainville began in the late 1980s, triggered by conflict over an enormous opencast copper mine at Panguna.

The mine was a huge export earner for Papua New Guinea but many in Bougainville felt they got no benefit and resented the pollution and disruption to their traditional way of living.

The mine has remained shut since the conflict. Some believe it could provide a future revenue source for Bougainville should it become independent.

The civil war lasted for a decade before the peace agreement was signed. The other key aspects of the agreement were a weapons disposal plan and greater autonomy for the region ahead of Saturday's vote.

Mr Rampolla said the peace agreement had been one of the few in the world that had lasted so long. He said it could end as a success story if the referendum and subsequent negotiations resulted in an outcome that everybody could support.