Salmond pleads not guilty to attempted rape during independence campaign 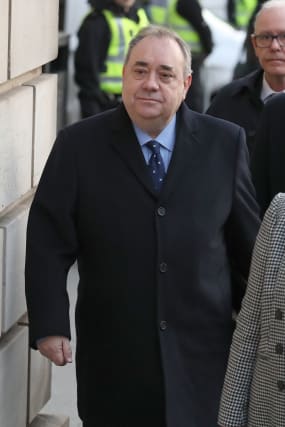 Alex Salmond has pleaded not guilty to attempting to rape a woman at Bute House, the official residence of the first minister of Scotland, during the independence referendum campaign.

The 64-year-old appeared at the High Court in Edinburgh on Thursday to face allegations of offences against 10 women.

They include a charge of attempted rape, 11 of sexual assault – including one with intent to rape – and two of indecent assault.

The charges span a period between June 29 2008 and November 11 2014, with one sexual assault said to have taken place in the month of the historic referendum.

Salmond attempted to rape a woman at Bute House in Edinburgh in June 2014, the indictment alleges.

It is said he placed her legs over his, repeatedly kissed her face and neck, groped her, then blocked her path.

Salmond is then said to have pinned her against a wall, pulled at her clothes and stripped himself naked before trying to rape her on a bed.

He is alleged to have forced a woman to lie on his bed at the first minister’s official residence then pulled up her dress with intent to rape her.

Meanwhile, the first of the charges involved incidents where Salmond allegedly indecently assaulted a woman by kissing her mouth and groping her on various occasions around Glasgow between June 29 2008 and July 24 2008.

The indictment states that in September 2014, Salmond grabbed a woman by her shoulders at Bute House, repeatedly kissed her face, tried to kiss her lips and touched her leg and face.

Several charges involved the accused allegedly groping women, including one incident at the Ubiquitous Chip restaurant in Glasgow in March 2012.

Judge Lady Dorrian continued the preliminary hearing until January 22 and set a trial date for March 9, which is expected to last four weeks.

Speaking outside court after the hearing, Mr Salmond said he would defend himself “vigorously” during the trial.

“The only proper place to answer criminal charges is in this court and that is exactly what I intend to do next spring,” he said.