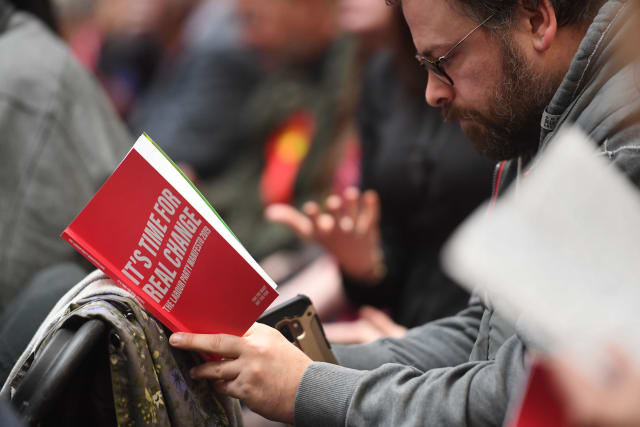 Labour’s manifesto says it will consult on establishing an inquiry into “fake news”.

The party says that “fake news” has eroded trust in the media and democracy.

“We will consult media-sector workers and trade unions to establish an inquiry into the ‘fake news’ undermining trust in media, democracy and public debate, and on a legal right of public interest defence for journalists,” it says.

The Tory election manifesto in 2017 pledged to protect free licences before handing the financial burden to the BBC, which will be restricting the benefit to those on pension credit.

Labour has previously said it would go ahead with a “Leveson part two” inquiry into the press and media.

The manifesto says that it will “address misconduct and the unresolved failures of corporate governance raised by the second stage of the abandoned Leveson Inquiry.”

The second part of the inquiry, which did not take place, was due to look into unlawful conduct within media organisations as well as relations between police and the press.

Labour says it wants steps taken to “safeguard a healthy plurality of media ownership” and “clearer rules on who is fit and proper to own or run TV and radio stations.”

It will “address the monopolistic hold the tech giants have on advertising revenues and will support vital local newspapers and media outlets,” it says.

In the arts, Labour says it will maintain the free museum-entry policy and launch a “Town of Culture competition,” which was previously called for by Yvette Cooper, on top of City of Culture.

It repeated its pledge to introduce an arts pupil premium to every primary school in England, “a £160 million annual boost for schools to ensure creative and arts education is embedded in secondary education”.

A £1 billion Cultural Capital Fund will be channelled into libraries, museums and galleries.

Its manifesto says it will consult on ways to “address the gender imbalance” in the digital creative industries and will work with trade unions and employers on diversity “so that everyone sees themselves represented on screen and on stage”.

It will also review the copyright framework on remuneration for artists and content creators and “make the distribution of National Lottery funding more transparent”.