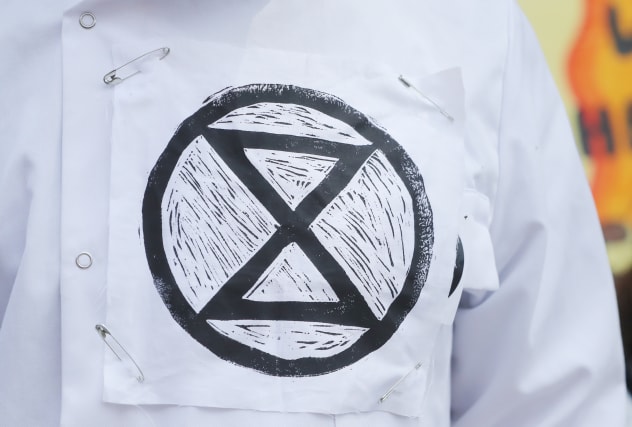 Extinction Rebellion has distanced itself from its co-founder Roger Hallam after he made controversial remarks about the Holocaust.

In an interview with German newspaper Die Zeit on Wednesday, Mr Hallam referred to the event, which claimed the lives of millions of Jewish people, as "just another f***ery in human history".

The environmental campaigner was discussing the launch of his new book, but spoke about other historical genocides.

"The fact of the matter is, millions of people have been killed in vicious circumstances on a regular basis throughout history," he said.

Mr Hallam added that, when viewed in the context of atrocities, the Holocaust was "almost a normal event ... just another f***ery in human history".

The environmental group "unreservedly" denounced Mr Hallam's comments, with local branches posting on Twitter in support of the Jewish community.

An Extinction Rebellion spokesman said: "Jewish people and many others are deeply wounded by the comments today (Wednesday).

"Internal conversations have begun with the XR Conflict team about how to manage the conflict process that will address this issue.

"We stand by restorative outcomes as preferable, although in some cases exclusion is necessary."

Mr Hallam was arrested in September for allegedly attempting to cause disruption at Heathrow Airport using a drone.

He is due to appear in court for a preparatory hearing on November 29 on charges of conspiracy to cause public nuisance, and a full trial is scheduled for February next year.

His comments prompted a backlash on Twitter, including from Germany's foreign minister Heiko Maas, who condemned Mr Hallam's remarks about the "uniquely inhumane" event.

Extinction Rebellion added: "Our 6th Principle states: We welcome everyone and every part of everyone working actively to create safer and more accessible spaces.

"Our movement must be safe for Jews as well as all other minorities, marginalised peoples, and religious groups.

"We stand in solidarity with XR Germany, with Jewish communities, and with all those affected by the Holocaust, both in the past and in our times."