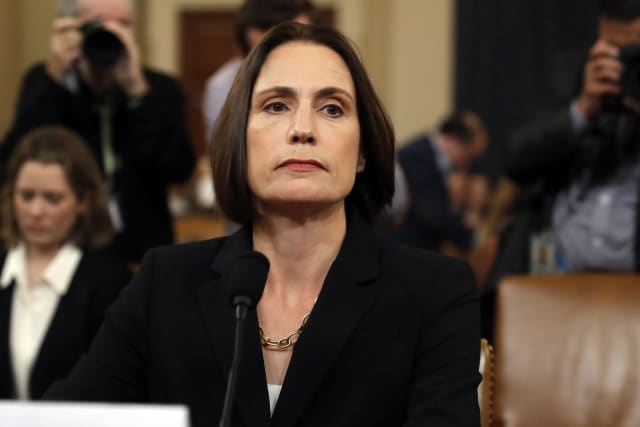 A coal miner’s daughter from County Durham who rose to be a top national security adviser in the US has taken centre stage during the impeachment hearings.

Millions of Americans tuned in to watch Fiona Hill, a distinguished Russia analyst, express her concerns about the machinations she witnessed inside Donald Trump’s White House.

The inquiry is attempting to assess if Mr Trump withheld military aid from Ukraine in order to pressure the country into investigating a political rival.

The president denied any wrongdoing.

During her testimony, Ms Hill’s name was the number one trending topic on Twitter in the US, with the Associated Press describing her as speaking in “rapid-fire and in the distinctive accent of the coal country of northeastern England where she grew up”.

In her opening statement, Ms Hill told the inquiry about her background, saying she is an “American by choice”, having become a citizen in 2002.

The 54-year-old, who was born in Bishop Auckland, said: “This country has offered for me opportunities I never would have had in England. I grew up poor, with a very distinctive working-class accent.

“In England in the 1980s and 1990s, this would have impeded my professional advancement. This background has never set me back in America.”

Ms Hill said it had been her father’s dream to move to the US, saying he “loved … its culture, its history and its role as a beacon of hope in the world”.

Her father died in 2012, she said, while her mother still lives in Bishop Auckland.

The Harvard graduate spent time in the Soviet Union during the 1980s and has served presidents George W Bush, Barack Obama and Mr Trump.

She left the White House in July, about a week before the phone call between Mr Trump and his Ukrainian counterpart which is the focus of the impeachment hearings.

In 2016 she attended an event on class held by the Guardian newspaper and recounted her experience of trying to enter Oxford University in the 1980s.

She compared it to a scene from the film Billy Elliot, which features a schoolboy from County Durham attending the Royal Ballet School.

“People were making fun of me for my accent and the way I was dressed. It was the most embarrassing, awful experience I had ever had in my life,” she said.

Ms Hill’s testimony, and the manner in which it was delivered, was well-received across the Atlantic.

David Axelrod, a former senior adviser to Mr Obama, said Ms Hill “is operating on a different level” to those questioning her.