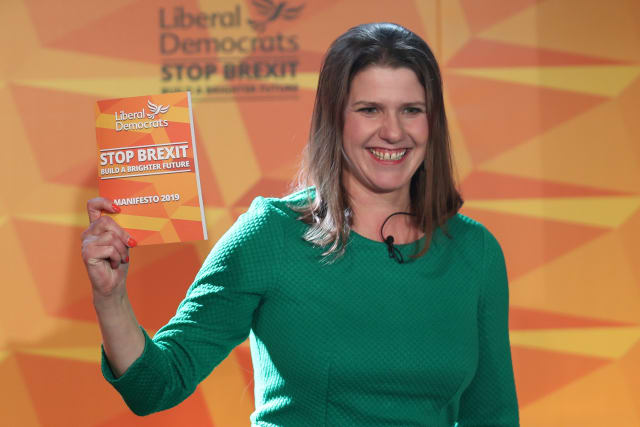 Liberal Democrat leader Jo Swinson has acknowledged it would be a “big step” for her to get to Number 10 from the party’s current poll ratings.

After months of insisting that she was a credible contender for Prime Minister, Ms Swinson appeared to change tack by saying supporting the Lib Dems was the best way of denying Prime Minister Boris Johnson’s Tories a majority, the BBC reported.

Launching the Lib Dem manifesto, Ms Swinson insisted the policy platform showed it is not a “one-trick” anti-Brexit party.

However, Ms Swinson admitted the Lib Dems are suffering a “squeeze” in the polls.

She admitted it would be a “big step” for her to enter Downing Street given the party’s current ratings, the BBC reported.

Ms Swinson insisted the party would do better than the opinion polls predicted, stating: “There has obviously been a bit of a squeeze, but at this point in the 2017 election the polls weren’t a very good indicator to what actually happened in the final outcome.”

Pressed on whether her leadership style could be rubbing voters up the wrong way, Ms Swinson told the PA news agency: “I’m certainly finding that when I meet with people, I’m getting a perfectly warm and enjoyable response, having good conversations with people across the country.”

The Lib Dems are currently standing in the mid-teens in a number of opinion polls after besting Labour and hitting the early 20s in recent months.

On a campaign visit to Cambridge, Ms Swinson insisted the Lib Dems have a wide-ranging agenda.

She told PA: “We have got ambitious plans for free childcare.

“We have ambitious plans to tackle the mental health crisis.

“We have bold plans to deal with the climate emergency.

“And significant investment in schools to give children the best start in life.

“All of those things, absolutely, become much easier to do if we stop Brexit and have the benefits of remaining in the European Union.

“There is a whole Liberal Democrat agenda which is a plan for a brighter future for our country.”