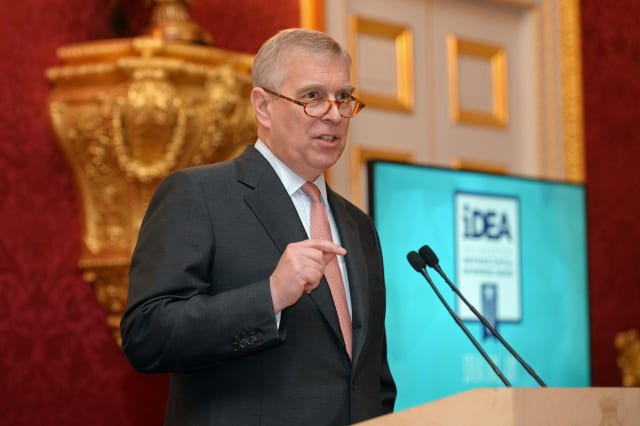 Telecoms giant BT has warned it will only continue to back a digital skills award scheme if the Duke of York is dropped as patron, as pressure mounts over the royal role of the Queen’s second son.

The firm joins a growing number of multimillion-pound businesses, universities and charities who have distanced themselves from Andrew in the wake of his interview about his friendship with convicted sex offender Jeffrey Epstein.

BT called for Andrew to be removed as patron of iDEA – The Duke of York Inspiring Digital Enterprise Award – a programme which helps develop digital enterprise and employability skills.

A spokesman for BT said: “We have been working with the company since its launch in 2017 and our dealings have been with its executive directors, not its patron, the Duke of York.

“As a leading provider of online digital skills training, iDEA was a natural partner for our new Skills for Tomorrow programme.

“However, in light of recent developments we are reviewing our relationship with the organisation and hope that we might be able to work further with them, in the event of a change in their patronage.”

Murdoch University in Perth has ended its relationship with Andrew’s tech initiative Pitch@Palace Australia, joining Bond University and the Royal Melbourne Institute of Technology (RMIT) who have also terminated their association, while the University of Wollongong (UoW) is reviewing its support.

Andrew was accused of showing a lack of empathy towards Epstein’s victims and a lack of remorse over his friendship with the disgraced financier, who took his own life while imprisoned earlier this year.

In the Newsnight interview, the duke also denied claims he slept with Virginia Giuffre, one of Epstein’s victims, on three separate occasions, twice while she was under age.

“We remain committed to supporting innovators and entrepreneurs.

“However, in the current circumstances we have decided that our efforts in this area are best served through other means.”

A Bond spokeswoman said: “We have previously said any new agreement would be considered in 2020. However, in light of recent events, the university does not intend to seek any further involvement.”

Pitch@Palace Australia did not respond to queries about its ongoing operation in the absence of partners.

The duke has cancelled a visit to flood-ravaged communities in South Yorkshire on Wednesday, The Sun and the Daily Mirror reported.

The developments come after London Metropolitan University said it would consider the duke’s role as its patron, while a student panel at Huddersfield University passed a motion to lobby Andrew to resign as its chancellor.

Asian-focused bank Standard Chartered has joined KPMG in deciding not to renew its sponsorship of the Pitch@Palace scheme.

AstraZeneca’s three-year partnership with Pitch@Palace is due to expire at the end of this year and is being reviewed, and Outward Bound Trust, of which Andrew is patron, is to hold a board meeting in the next few days to discuss the matter.

Amid the unravelling of the duke’s position, former home secretary Jacqui Smith made fresh claims of racism, saying Andrew made “racist comments about Arabs that were unbelievable” at a Buckingham Palace state banquet.

A Buckingham Palace spokesman said in response to the claim: “HRH has undertaken a considerable amount of work in the Middle East over a period of years and has many friends from the region. He does not tolerate racism in any form.”

He added that Andrew would be continuing his role focusing on tech entrepreneurs.