Hongi and haka greetings for Charles and Camilla in Auckland 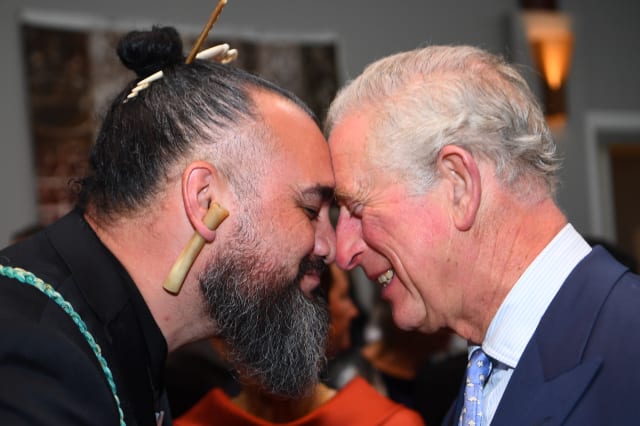 An energetic Maori greeting and more serene harbourside flag-waving welcomed the Prince of Wales and Duchess of Cornwall to Auckland.

Charles and Camilla started the second day of their tour to New Zealand in the grounds of Government House, where Maori elders Kaumatua and Kuia and performed the hongi – a greeting which saw them rub noses.

A boisterous haka then followed, performed by members of the New Zealand Defence Force’s Maori cultural group, while elders explained each step to the couple.

In the afternoon, there was a more serene reception for Charles and Camilla – on their third tour to the country – in the city’s Wynyard Quarter, where hundreds of well-wishers sought to catch of a glimpse of the royal visitors, including workers at a building site overlooking the walkway.

It was the same walkway where the Duke and Duchess of Sussex met an enthusiastic crowd just over a year ago during their first overseas tour as a married couple.

Tuesday saw the first mention of the recent Rugby World Cup in Japan, where England saw off the All Blacks 19-7 in the semi-final before going down to South Africa in the final.

The Prince’s Trust was established in New Zealand just over a year ago and one of its ambassadors is Ali Williams, capped 77 times for the All Blacks.

When Charles mentioned the recent tournament at a Prince’s Trust Tea in the city’s Mantells restaurant, the lock joked: “We like to share it around.”

Camilla herself attended a tea, where she was told of inspirational work that women and girls in New Zealand are taking on during a Women of the World (WOW) event.

Camilla, president of WOW, listened to speeches from a Paralympian and model, two schoolgirls and the 20-year-old chief executive of a social enterprise.

WOW was launched by Jude Kelly in 2010 and aims to celebrate the achievements of women and girls and looks at what obstacles they face in achieving their potential.

Among the speakers was Alexia Hilbertidou, who founded GirlBoss New Zealand as a teenager to close the gender gap in science, maths, technology and leadership and now runs workshops to empower women.

The 20-year-old said: “I started to wonder ‘Why are so many of my female friends, who are so intelligent and so capable, not going into these fields and not feeling like they belong?’”

She added that she was passionate about her generation being the one that sees a change in equality statistics, pointing out that there were more people called John than women who serve as chief executives of New Zealand’s biggest companies.

Sporting a brooch with the WOW logo, Camilla told the audience: “It (WOW) gives women a chance to face the obstacles that block their paths and talk about the different solutions to the challenges in their life.

“Above all, it celebrates and supports the achievements of multiple women and girls of every culture and community.”

The duchess also paid tribute to the “brilliant” staff at a New Zealand domestic violence charity.

Camilla has long campaigned on the issue and was visiting Shine, which stands for Safer Homes in New Zealand Everyday, and helps thousands of adults and child victims of domestic abuse.

“You’re all doing a brilliant job. Just listening to the survivors is so important,” she told staff at Shine’s headquarters in Auckland.

The second day of the tour drew to a close with a reception at Government House, attended by guests including singer Dame Kiri Te Kanawa, who performed at the wedding of Charles and Diana, Princess of Wales, in 1981.

The tour now moves to Waitangi, a significant region in the history of New Zealand where a treaty was signed on the relationship between the Maori and Crown.