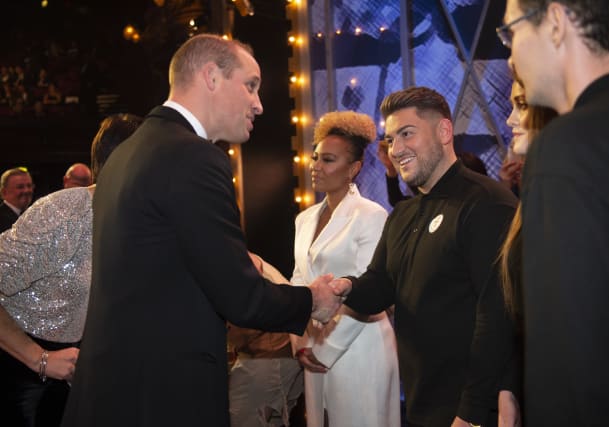 The Duke of Cambridge has given the comic two-hander of Romesh Ranganathan and Rob Beckett the “royal seal of approval” after they hosted the Royal Variety Performance.

The duke and duchess were entertained by a cast of famous faces at this year’s show at the London Palladium on Monday night.

Ranganathan and Beckett compered the show as the first comedic pair at the helm in more than 30 years, since Ronnie Corbett and Bruce Forsyth in 1988.

After making a number of jokes about not being a double act, the pair gifted William a tea towel featuring their faces and the words: “What are we not? A double act.”

After the performance, William and Kate took to the stage to speak with the night’s performers including Lewis Capaldi, Robbie Williams, Colin Thackery and Emeli Sande.

Six-year-old Aurelia from Zurcaroh, an Austrian acrobatic dance troupe that performed on the night, made William and Kate smile as they spoke on stage.

Kate had earlier been handed a bouquet of flowers and William quipped: “How come she got a bouquet and I got a dodgy tea towel?”

Beckett told the PA news agency that William had said to him: “I know you are not a double act but it’s really good – we give you the royal seal of approval.”

Ranganathan added: “Because Rob and I are such good mates and we have a style about us, we wanted to bring ourselves to the show but also respect the occasion. It’s walking the line.

“(William and Kate) are convinced we are a double act. They gave us the seal of approval.”

Beckett joked: “He said I shouldn’t have got him the tea towel, which I think was a little bit ungrateful.”

Other performers on the night included Cellist Sheku Kanneh-Mason, Cirque Du Soleil’s Luzia and the cast of Mary Poppins.

Capaldi told PA: “Speaking to William. It was lovely. It was a lovely chat. I asked whether he ever gets nervous having to work out what to say to all these people.

“People don’t expect me to be nice. Kate and Wills have to be very nice.

“He said he could talk for Britain. And I thought: ‘Well that’s lucky.’”

Last year saw the Duchess of Sussex attend her first Royal Variety Performance alongside her husband, where they watched acts including Britain’s Got Talent’s 2018 winner Lost Voice Guy.

Before the performance, William and Kate met actress Petula Clark and two of her co-stars in Mary Poppins, which is currently playing at the Prince Edward Theatre in nearby Soho.

Speaking with the couple in the foyer of the London Palladium, Clark said: “You should bring the children.”

Kate responded by saying Charlotte, Louis and George would “love” it.

The origins of the Royal Variety Performance date back to 1912, when King George V and Queen Mary agreed to attend a Royal Command Performance at the Palace Theatre in London, in aid of the Variety Artistes’ Benevolent Fund.

The Royal Variety Performance will air on ITV in early December.