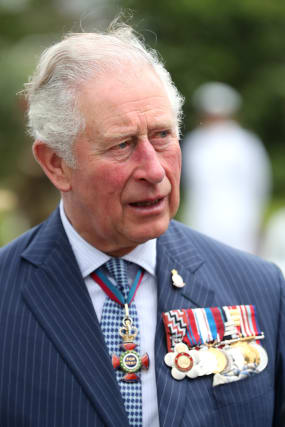 The Prince of Wales and Duchess of Cornwall sampled some of New Zealand’s produce during the first day of their visit to the country – creating and sampling their own wine blend.

Charles and Camilla, under the watch of winemaker Pete Turner, sampled reisling, pinot gris and albarino grapes at the Hunting Lodge Vineyard in the Waimauku region, near Auckland.

Rain was falling heavily on the 80-hectare site meaning the chance to see the grapes up close was not possible, but the pair shared laughs and smiles indoors as they mixed the white wines to taste.

The blending process saw the couple choosing a grape which they preferred to serve as a base, before other varieties were added to enhance the flavour.

Mr Turner said that Charles opted for a blend of 75% reisling with pinot gris to finish.

“It was a chance to introduce them to the concept of blending, creating just a nice zesty, straight-forward white wine that represents New Zealand.

“Reisling is a very lemony, zesty, acid-driven style but there is some nice sweetness to it. There’s a lot of intensity to it.

“A little pinot gris helped round it out. It’s a really nice balanced wine.”

The winery was the place where the first New Zealand sauvingnon blanc was created after cuttings were imported from California in the 1970s, and the grape is one of the main varieties currently grown on the site.

The first full day of the tour to New Zealand began on a solemn note, as the couple paid tribute to those who had served the country at the Mount Roskill War Memorial.

Crowds peeked through the trees at the suburban Auckland site, while Charles laid a wreath with the message “in solemn remembrance” on the cairn.

The site also contains a memorial to men from the Pacific island Niue who fought alongside the 3rd Maori Contingent in the First World War, with 150 men having departed for Auckland on the SS Te Anau on October 13, 1915.

Members of the city’s Niue community sung a medley of traditional songs from the country before the arrival, and gave the royal visitors gifts.

Dorothy Sietu gave the couple a bedsheet which she had made herself.

“It’s king size,” she said of the sheet after meeting the royal party.

They were also given a hat and table mat by Sina Utalo Panama, whose grandfather Fakalagakai Falani served as a private.

“In our community we say things with our heart,” she said.

Another gift Camilla received on Monday was a golden wreath of Cadbury’s Crunchie bars at the Wesley Community Centre from five-year-old Joelle Leilua.

Charles laughed as he rearranged her garland, which had been made by the Kidzone programme; they had selected gold to signify the royal couple.

The royals were welcomed to the centre with a Maori Mihi whakatau or greeting.

A group of male dancers entertained the couple, before they met other users of the centre, and Charles met Richard Barter who runs Bike Kitchen which repairs donated bikes and gives them to local families.

Charles was particularly taken with his little Shih Tzu Chino who had been given a bath “specially for the royal visit”.

The day was rounded off at the Royal New Zealand Air Force Whenuapai, where Charles presented the Queen’s Colour at the site 66 years after the Queen performed the same ceremony in December 1953.