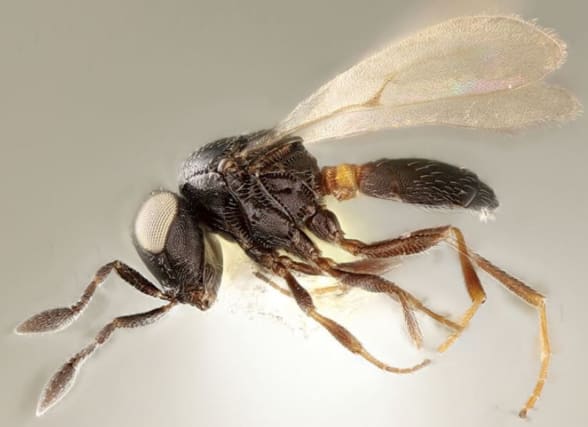 When people think of Idris Elba they think of Luther, The Wire, or even his DJ sets – what does not spring to mind is a wasp.

But scientists have named a newly discovered wasp species after the British actor and musician.

The insect was detected in Guanajuato, Mexico, where it was found to parasitise the eggs of an invasive stink bug, the bagrada bug, which is a major pest of cruciferous vegetables such as cabbage and broccoli.

The genus Idris was described in 1856 and now contains more than 300 species, with many more species still undescribed.

Species of Idris were previously known to only parasitise spider eggs.

Dr Refugio Lomeli-Flores and his team in Guanajuato were therefore surprised to see specimens of Idris emerging from the eggs of the bagrada bug.

They were able to match the DNA of the adult wasp with DNA left behind in the eggs of the bug, and have it confirmed that it was an undescribed species.

Scientists say the discovery of this wasp marks an important step towards the development of efficient and natural control of the stink bug species Bagrada hilaris in North America.

Commonly known as the bagrada bug, it is native to Africa, but is an established and important pest of more than 74 plant species in India, southern Europe, southern Asia and the Middle East.

Across the Atlantic, it has been known since 2008, when it was reported from Los Angeles, California, followed by records from Coahuila state, Mexico, in 2014.

Three years later, it was also found in the state of Guanajuato, which is responsible for more than 70% of the country’s broccoli production, as well as the major import of broccoli and cauliflower in the US and Canada.

But measures to halt the bug’s invasion have been largely ineffective.

Published in the Journal of Hymenoptera Research, the study sets out that it is not uncommon for native parasitoids to attack an introduced host.

But the research team from Colegio de Postgraduados (Mexico), Agriculture and Agri-Food Canada (AAFC) and the Florida State Collection of Arthropods (FSCA) said Idris elba is exceptional because it demonstrates that these wasps can make the leap from parasitising the eggs of spiders to the eggs of stink bugs.

The authors said: “The physiological and developmental suitability of B. hilaris eggs for I. elba is remarkable given the fact that the accidental host is not closely related to the hosts that are usually attacked by Idris species.”

Researchers are of the opinion that the species might prove to be a Heimdall-like “protector” for many crops.

Elba played the character Heimdall in a number of Marvel movies including Thor: Ragnarok and Avengers: Infinity War.

Heimdall’s namesake, Heimdallr, is a Norse deity believed to be the sole protector of the bridge linking the human world and the realm of the gods.