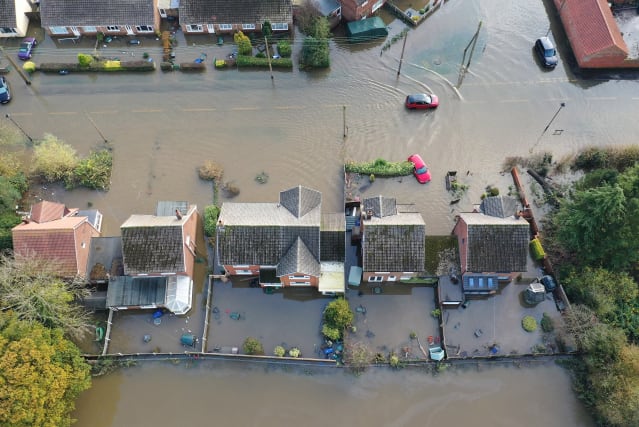 Heavy rainfall has continued to cause disruption but flood-hit communities are set to get some respite this weekend with drier conditions predicted.

There are 118 flood warnings in place covering much of England and parts of Wales following heavy rainfall on Thursday night.

The wet weather created travel disruption on Friday morning, with many rail services in Yorkshire being delayed or cancelled.

But the Met Office is predicting better conditions over the weekend, with spokesman Oli Claydon saying: “In a nutshell, not fantastic, bright blue skies for the weekend, but in terms of rainfall it will be a much better picture.

“There will be a few showers knocking around, but nothing in terms of accumulations of rainfall like we’ve seen over the last week.”

He added: “Where we are at the moment in terms of much of the UK is that it’s fairly dry and cloudy with a few scattered showers around.

He said that wet weather will move north and westwards on Friday night, but only around 10mm to 20mm of rainfall is predicted in the South East.

Mr Claydon said that there would be some rainfall in flood-affected areas on Friday and Saturday, but “nothing to be concerned about”.

A Met Office yellow weather warning for rain across much of the north of England on Thursday passed without a major incident in the flooded communities in South Yorkshire.

The weather service had a yellow warning in place on Friday morning for ice in parts of Northern Ireland.

Residents in those areas were warned of a “risk of icy roads” and were told to expect “some icy patches on some untreated roads, pavements and cycle paths”.

Flooding in Kirk Sandall, Doncaster, caused disruption to rail networks on Friday morning, with TransPennine Express services between Sheffield and Scunthorpe being suspended.

The A63, which runs from Leeds to Hull, was closed on Thursday night in the rainfall but reopened the following morning.

Deluged communities in Doncaster are still feeling the effects of this month’s deluge, with the Environment Agency (EA) explaining how machines have been pumping 2.5 tonnes of water per second out of the village of Fishlake.

Army soldiers from the Light Dragoons have been working since Wednesday to lay down sandbags and firm up flood defences in the area, and in neighbouring Stainforth.

The villages are two of the worst-hit in the floods, with some residents being forced to leave their homes.

The leaders of councils in Doncaster, Rotherham, Sheffield, Barnsley, Bassetlaw and Kirklees have written to Communities Secretary Robert Jenrick warning of “considerable and lasting damage” and urging more funding to help them cope with future flooding, the Guardian reported.

The paper said that around 1,800 homes and businesses had been affected by flooding in South Yorkshire.

On Friday morning, Martin Christmas from the EA warned that people had been trying to steal some of the pumps being used to help flooded homes in South Yorkshire.

He said: “A plea to anyone out there in the area who sees anyone suspicious, please get in touch with police.

“We don’t want this to hamper our recovery effort in the Doncaster area.”