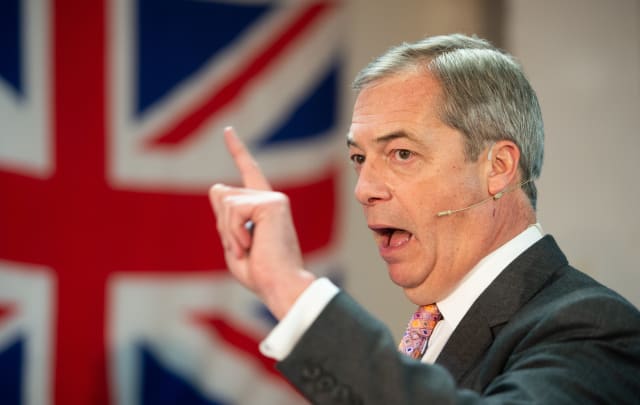 Nigel Farage is under pressure to pull Brexit Party candidates from marginal seats with the deadline for nominations just hours away.

The Prime Minister has insisted voting Conservative is the “only way” to get Brexit done, while Business Secretary Andrea Leadsom warned that voting for Mr Farage’s party hands the keys of Number 10 to Jeremy Corbyn.

Mr Farage has said he will field candidates in every Labour-held seat – in a move that could hamper Tory efforts to win a majority.

The PM stopped short of urging Mr Farage to withdraw his candidates from Tory-Labour marginal seats on Wednesday, but the Daily Telegraph has reported that the Tories have offered an electoral pact to Mr Farage that would mean the Brexit Party targeting just 40 key seats.

The newspaper said the deal was turned down by Mr Farage, who had urged the Tories to give the Brexit Party a clear run in Labour-held seats where they can “never win”.

But a Tory source said: “We don’t do electoral pacts as we have been very clear on.”

In a major climbdown, Mr Farage announced on Monday that his party would not run in the 317 constituencies the Conservatives won at the 2017 general election, after initially saying his party would field more than 600 candidates.

He said he made the decision amid fears that it could split the Brexit vote, leading to a hung parliament and a second referendum.

But there have been calls for Mr Farage to go even further if he wants to keep Mr Corbyn out of Number 10.

Mr Johnson said on Wednesday that the Tories were committed to a One Nation programme, despite ex-Conservative cabinet minister David Gauke – a key advocate of such a philosophy – suggesting those opposed to a no-deal “lend” their votes to the Liberal Democrats.

Baroness Brinton, president of the Lib Dems, said her party is “absolutely clear” that it is “fighting for Remain”, adding: “David has not quite got to a Remain position.”

She told BBC’s Newsnight: “If he really wants to lend his vote to the Liberal Democrats then he could stand back in South West Hertfordshire.

“Appreciate that he doesn’t want to do that, but we wish to stand in South West Hertfordshire.”

Baroness Brinton added: “We will fight it for everything.”

Meanwhile, the Tories are in the lead with 40% while Labour is on 30% ahead of next month’s election, according to a new poll.

The voting intention poll for the Telegraph, which involved 2,022 adults on November 11 and 12, put the Lib Dems on 16% and the Brexit Party on 7%.

Elsewhere, European Council president Donald Tusk has appeared to back Mr Johnson’s opponents by advising campaigners not to give up on stopping Brexit.

In a speech, Mr Tusk said: “The UK election takes place in one month. Can things still be turned around? Hannah Arendt taught that things become irreversible only when people start to think so.

“So the only words that come to my mind today are simply: Don’t give up. In this match, we had added time, we are already in extra time, perhaps it will even go to penalties?”

His remarks came as Ms Leadsom said she is “absolutely confident” that the Conservatives will get a free trade deal done by the end of 2020.

But when pressed on the matter on ITV’s Peston, Ms Leadsom said: “Until we reach the end of 2020, we won’t know for sure.”

She added: “I think anybody who wants to leave the European Union with a deal needs to vote Conservative.

“Voting for the Brexit Party won’t mean we leave the EU. It will simply mean we get Jeremy Corbyn.”