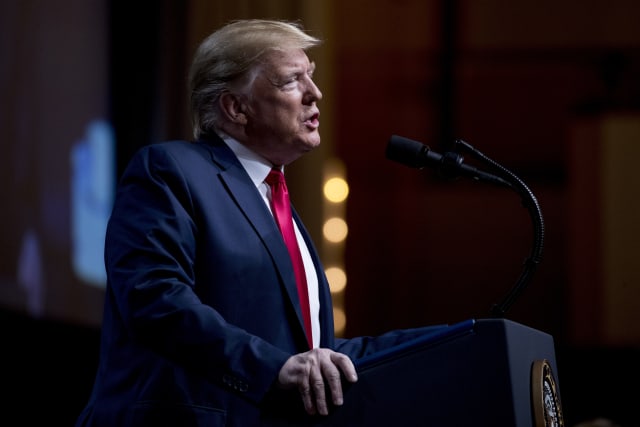 The European markets slid lower after Donald Trump accused the EU of imposing “terrible” trade barriers as traders wait to hear if he will impose tariffs on cars and auto parts.

Concerns over trade drove the FTSE 100 lower, while the pound was also subdued after a greater-than-predicted decline in inflation.

The FTSE 100 trimmed its losses slightly in the afternoon trading, but still finished in the red after the US president added on Tuesday evening that he was ready to “substantially” raise tariffs on Chinese goods if trade talks fail.

David Madden, market analyst at CMC Markets UK, said: “The mood in the markets today is one of disappointment in the wake of the update from President Trump.

“Dealers were hoping for clarity in relation to trade, and many were expecting the US leader would defer making a decision on EU auto tariffs, but instead he boasted about his achievements.”

In Europe, dealers dropped a number of key stocks in European markets as they became increasingly cautious over the lack of trade progress.

The German Dax decreased by 0.4% while the French Cac moved 0.3% lower.

Meanwhile, sterling stagnated after inflation fell to its lowest reading in almost three years at 1.5%, significantly below the Bank of England’s 2% target.

The company brought legal action against the Communication Workers Union (CWU) after members voted to back walkouts by 97% on a turnout of 76%.

Pub group JD Wetherspoon also finished higher after it revealed sales were up 5.3% in the 13 weeks to October 27 on a like-for-like basis.

It closed up 41p at 1,566p, despite chairman Tim Martin launching a scathing attack on corporate governance rules and advisers which he said are causing companies to collapse.

Elsewhere, retail property specialist British Land finished at the foot of the FTSE 100 after almost £600 million was slashed from the value of its retail property portfolio as it was hit by turmoil for high street retailers.

The shopping centre operator was weighed down by the recent flurry of shop closures and restructurings by major high street retailers in the six months to September. Shares in the business finished 19p lower at 556.2p.

The price of oil was given a lift after OPEC predicted the growth of shale production in 2020 is likely to be less than previously expected.