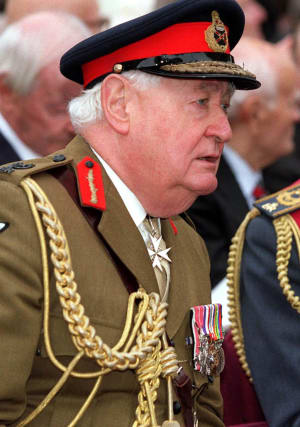 Lord Bramall, a former head of the Armed Forces and D-Day veteran, has died at the age of 95.

Field Marshal Edwin Noel Westby Bramall, an Eton graduate, served in nearly all major UK military campaigns between the Second World War and 1985, when he retired from the military.

Born in Tonbridge, Kent, the former highest-ranking soldier in the UK was commissioned in the King's Royal Rifle Corps in 1943.

He served during the Normandy Landings in June 1944, later going on to hold the position of Commander-in-Chief of UK Land Forces between 1976 and 1978.

The decorated war veteran was made chief of the defence staff – Britain's most senior military officer – in 1982.

Former defence secretary Lord Heseltine, whose tenure coincided with when Lord Bramall was head of the Armed Forces, called him an "outstanding soldier" in a tribute.

"From his earliest experiences in the liberation of Europe and the D-Day landings, to his distinguished tenure as chief of the defence staff, he was a man who inspired confidence," Lord Heseltine told the PA news agency.

"It was an outstanding privilege of my life to work with him in the Ministry of Defence."

Lord Bramall went on to have a 26-year career in the House of Lords, retiring in 2013.

He used one of his final speeches in the Lords to say a replacement for Trident was unnecessary after repeatedly speaking out against ongoing development of the UK's nuclear weapons.

"His public humiliation following the scandalous allegations was one of the most disgraceful episodes of my political life," Lord Heseltine said.

He added: "The country has lost a great patriot who deserved better from us."

Lord Bramall was one of a number of high-profile people who were falsely accused by fantasist Carl Beech – known as "Nick".

The war veteran's home was raided by up to 20 officers in March 2015 as part of Operation Midland, while he had breakfast with his wife Lady Bramall, who died in 2015, before he was cleared of any misconduct.

Metropolitan Police Commissioner Dame Cressida Dick personally apologised to Lord Bramall for the "great damage" the force's investigation caused to him and his family.

Beech was given an 18-year prison sentence earlier this year for falsely claiming that he had been sadistically abused by figures from the worlds of politics, the Armed Forces and security services.

The jury were shown a police interview with Lord Bramall during Beech's trial, which saw him thump the table and brand the claims "ridiculous".

When it emerged he would face no action in 2016, then London mayor Boris Johnson said: "It is pretty clear that Field Marshal Lord Bramall is owed a full and heartfelt apology."

Former Conservative MP Harvey Proctor, who was also targeted by Beech's false claims, said Lord Bramall will be "remembered as a military leader of enormous stature, courage and ability".

He added: "The country is the poorer for his death."

Following reports of his death on Tuesday, Dame Cressida said: "I met him recently to apologise personally for the great damage the Metropolitan Police investigation into Carl Beech's false allegations has had on him and his family.

"I was struck by his selflessness and generosity in the issues he wanted to discuss, focusing on a desire to ensure the lessons from Operation Midland had been learnt by the Met."

She added: "He was a great man, a brilliant soldier and leader, and much-loved family man. He was a true gentleman and will be hugely missed."

Known to his friends and family as Dwin, Lord Bramall married his late wife Dorothy in 1949, and they had two children.

His illustrious career saw him awarded a Military Cross for his bravery in the Second World War in March 1945, and he was later made a Knight of the Garter and awarded an OBE.

And now FM The Lord Bramall..

An inspirational leader, fellow Green Jacket and mentor who landed on the Normandy beaches, received an MC in Holland a year later, served in our Special Forces, commanded the British Army and then the entire Armed Forces.
RIP@RiflesRegimentpic.twitter.com/DySu0kTtjJ

A statement said: "He was a remarkable soldier who served our country with great bravery and dedication over many decades, inspiring his many subordinates, and overseeing significant change as a Chief of Staff that we still benefit from today.

"We will all miss his wisdom, his generosity and his rifleman's lightness of touch."