DUP targets North Down in bid to increase Westminster seats 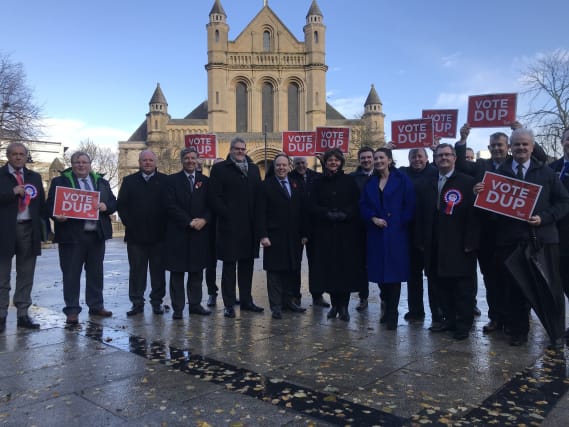 The party won 10 seats in 2017 but is facing speculation that several of these could be at risk on December 12.

DUP deputy leader Nigel Dodds is expected to face a close race with Sinn Fein candidate John Finucane in North Belfast, and Emma Little Pengelly is facing strong competition from the SDLP’s Claire Hanna after other parties stepped aside for her as part of a pro-Remain voting pact in South Belfast.

However, Mrs Foster insisted her party is going into this election with the aim of making gains.

She singled out North Down, where Independent unionist Lady Sylvia Hermon said she would not contest her seat, as a key target.

Mrs Foster made the comments at the Electoral Office in Belfast as several of her party’s candidates submitted their nomination papers.

“We’ll be putting the effort into all of the seats we held and indeed looking for more as well.

“Lady Sylvia Hermon is not running and we were the runner-up in North Down on the last occasion so we’ll be putting forward a very strong team in North Down looking to take that seat as well this time,” she told PA news agency.

“So we’re not only looking to retain the seats we held, but we are also looking to make gains as well.”

Asked if she was hopeful the DUP might continue to have the influence it held in the last Parliament – where its 10 MPs helped bolster the Conservatives with a confidence and supply agreement – Mrs Foster insisted her party will keep influence at Westminster.

Mrs Foster also criticised Sinn Fein, claiming the party is going around the doors “empty handed having delivered nothing but chaos”.

She added, in reference to Sinn Fein’s abstentionist policy at Westminster: “Sinn Fein want a mandate to do nothing, we want a mandate to get Northern Ireland moving again and build on our record of delivery.”