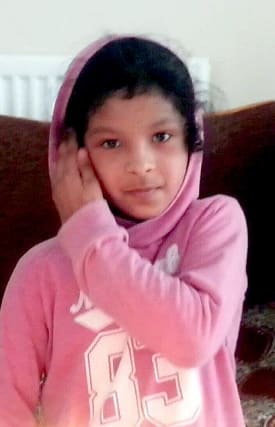 A coroner has said she will write to all UK theme parks urging them to conduct CCTV training following the death of a schoolgirl who drowned after she fell from a theme park’s river rapids ride.

Evha Jannath was “propelled” from a six-seater vessel on Splash Canyon at Drayton Manor on May 9 2017, while on an end-of-year school trip with staff and friends from Jameah Girls Academy in Leicester.

A jury concluded that the monitoring of CCTV “did not identify any misbehaviour” of the 11-year-old, despite the inquest hearing she had been standing up and “reaching into the water”.

The theme park told the coroner the ride would not reopen “in the current format” and until it had the consent of the Health and Safety Executive (HSE).

Stafford Coroner’s Court was told that the emergency stop button for the ride was not pressed despite Evha’s fall.

Evha and four friends had boarded the vessel without a teacher after school staff agreed to the pupils’ request to go on the ride unaccompanied.

Speaking on behalf of the theme park, Jim Sturman QC said: “The ride will currently not reopen in this design.

“The ride will not reopen until proceedings with the Health and Safety Executive have concluded.

“It will not reopen without the express consent of the HSE.”

Speaking about the letter she intended to write, assistant coroner Margaret Jones said: “It will be addressed to the park and all other parks and it will cover CCTV training, using the PA and all things you might expect the letter to contain.”

The coroner said the inquest had been “very distressing” for witnesses, and extended her thanks to those who entered the water to try to help the youngster.

She also expressed her condolences to Evha’s brother and uncle, who attended court on Monday.

The inquest at Stafford’s County Buildings was told how Evha – who was unable to swim – initially fell into water up to her thighs.

Appearing uninjured, she was then shown on CCTV wading along the edge of the ride route, towards the exit platform, trying to get back to her friends.

Her schoolmates were shouting back towards Evha, while another member of the public standing at the ride course’s barrier a few feet above told her to “stop” where she was.

The youngster carried on wading and then attempted to climb the ride’s “travelator”, which lifts the ride vessels up out of the water, to an exit platform.

But as she climbed the “algae-covered” wooden planks on the mechanism, she fell off the side into a “much deeper” area of water at the park in Tamworth, Staffordshire.

After pupils and members of the public raised the alarm, theme park staff rushed to the ride and began a search.

Some 11 minutes after staff were alerted to Evha originally going into the water, she was spotted “face down”.

It was another six minutes before theme park staff were able to pull her out, when she was described as “lifeless”.

Returning a conclusion of accidental death after four-and-a-half hours of deliberations, the jury panel of three men and seven women said in their findings: “There was no opportunity to rewind the CCTV footage.

“The monitoring of the CCTV did not identify any misbehaviour.

“The sign at the entrance for the ride does not tell passengers to sit.”

The jury said the sign did however say the ride was “bumpy”.

The findings added: “There were 11 worded signs which instructed guests to remain seated and hold the centre ring.”