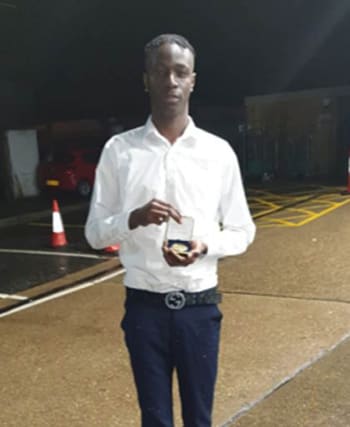 A teenager who was fatally stabbed while attending a knife awareness course in west London has been named by police.

Hakim Sillah, 18, died in hospital after the attack at Hillingdon Civic Centre in High Street, Uxbridge, on Thursday afternoon.

Police said a group of youths had been attending a by appointment event at the council-run youth offending service in the building when a fight broke out.

Officers were called shortly before 4.40pm and arrived at the scene to find Mr Sillah with a critical stab injury.

He was taken by ambulance to a west London hospital where he later died at 5.25pm.

A 17-year-old boy arrested on suspicion of murder was being questioned by police on Friday afternoon.

A third male, in his teens, was hailed by detectives for “bravely” trying to break up the fight that led up to Mr Sillah’s death.

He has since been discharged from hospital after receiving treatment for a non-life threatening stab wound.

Mr McHugh said: “This is an absolute tragedy. A young man with his whole life ahead of him has been fatally attacked and his family are absolutely devastated.

“We are doing everything we can to find those involved. What we know so far is that a fight broke out between males at the location and as a result this young man received fatal injuries. A second independent male bravely tried to intervene to break up the fight and as a result was also stabbed.

“We want to hear from anyone who was there so we can understand what happened prior to the murder taking place and events immediately afterwards. One male is currently in custody and is being interviewed.”

Prime Minister Boris Johnson, who represented the constituency of Uxbridge and South Ruislip before the election was called, tweeted on Friday: “Very sad news from Uxbridge last night. My thoughts are with the victims friends & family.”

Asked if people had been screened for weapons before entering the civic centre, Hillingdon Council said in a statement: “The matter is being investigated by the police and we are unable to comment further at this time.

“Our thoughts are with the victim’s family.”

Mr McHugh appealed for anyone who may have captured footage of the incident or had information on events before and after it to share it with the police.

“We’ve made an arrest and we are not looking for anyone else at this time but equally we need witnesses to come forward or people who hold information,” Mr McHugh added.