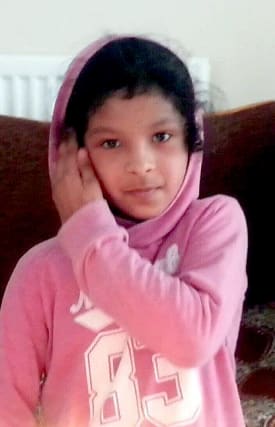 An 11-year-old girl who drowned after falling into 12ft of water at Drayton Manor theme park was allowed aboard the river rapids ride without a teacher, an inquest heard.

Evha Jannath was “propelled” from a six-seater vessel on Splash Canyon on May 9 2017, while on an end-of-year school trip with staff and friends from Jameah Girls’ Academy in Leicester.

An inquest heard Evha and other pupils on the circular vessel had been repeatedly standing up, and “reaching into the water”, against the rules, before it struck a barrier, sending her head-first into the water.

Evha and four friends boarded the boat without a teacher after the member of staff allocated to look after them stayed with another pupil who did not want to go on the ride.

The inquest at Stafford’s County Buildings was told by Detective Inspector John Quilty, of Staffordshire Police, how Evha – who was unable to swim – initially fell into water up to her thighs.

Appearing uninjured, she was then shown on CCTV wading along the edge of the ride route, towards the exit platform, trying to get back to her friends.

Her schoolmates were shouting back towards Evha while another member of the public stood at the ride course’s barrier a few feet above told her to “stop” where she was.

The youngster, who was still in the water, carried on wading and then attempted to climb the ride’s “travelator” which lifts the ride vessels up out of the water, to an exit platform.

But as she climbed the “algae-covered” wooden planks on the mechanism, she fell off the side into a “much deeper” area of water at the park in Tamworth, Staffordshire.

After pupils and members of the public raised the alarm, theme park staff rushed to the ride and began a search.

Some 11 minutes after staff were alerted to Evha originally going into the water, Evha was spotted “face down”.

It was another six minutes before theme park staff were able to pull her out, when she was described as “lifeless”.

Despite CPR being administered at the scene and advanced life support by air ambulance medics, she was pronounced dead less that two hours later at Birmingham Children’s Hospital.

Opening an inquest into her death on Monday, assistant coroner for South Staffordshire Margaret Jones said Evha and her friends had been on the ride “without incident” accompanied by teachers, earlier that day.

The hearing was told that according to the theme park’s ride height restrictions, Evha was allowed aboard the vessel without an adult.

A signed risk assessment prepared by the school before the trip stated that a member of staff would be “allocated” to groups of five or six primary age pupils, like Evha, while the older secondary age pupils could supervise themselves.

DI Quilty said: “The member of staff allocated to Evha and her group remained at exit and did not join her group and her intention was to meet children as they came off exit.”

A member of the theme park ride staff said he observed the “good behaviour” of Evha and her friends boarding their vessel.

But CCTV showed that as soon as the ride begun, Evha and some of the other girls were leaving their seats and not keeping hold of the safety rail.

DI Quilty, who led an investigation into the incident, said: “At no point do we actually see her sat (in her seat) on the ride.”

Describing the moment the youngster was ejected from the vessel, he said: “Evha is sat out of the seats, in the gap (between the seats).

“She is sat down at this point in time, and when the boat makes contact (with the barrier) – at the worst possible time – she stands up and, as a result of the propulsion and force of the barrier, that propels her out of the vessel.

“She is just standing up and as soon as she makes contact with barrier she is pushed out, there’s nothing behind her and she naturally falls out.”

Dr Frances Hollingbury, a Home Office pathologist, said she had determined a cause of death of drowning, although it was initially recorded as a result of blunt force trauma to the chest.

She added that although Evha suffered multiple rib fractures, possible injuries to the lungs and a broken pelvis, she “wouldn’t have expected Evha to have died as a direct result of these injuries, without complications”.