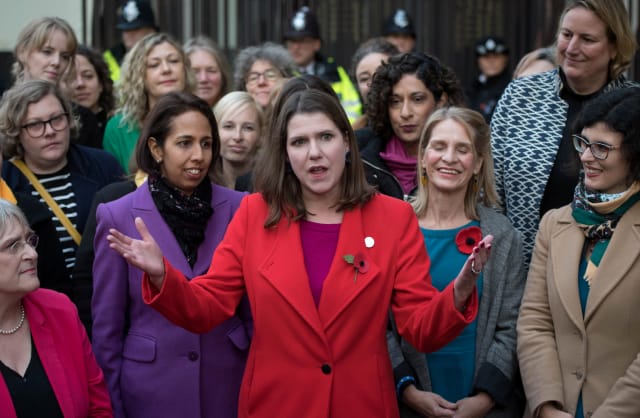 Liberal Democrat leader Jo Swinson has said her party will launch legal action if ITV does not include her in its televised leaders' debate.

The party has already complained to ITV about Ms Swinson's exclusion from an election debate between Boris Johnson and Jeremy Corbyn.

About 90 minutes after Ms Swinson spoke to the media, it emerged that Sky News is proposing a live TV debate between Mr Johnson, Mr Corbyn and Ms Swinson on Thursday November 28.

The Lib Dem leader retweeted a tweet about the proposed debate, and wrote: "I'm in. Will you show up @BorisJohnson & @jeremycorbyn?"

Ms Swinson said the Lib Dems are taking advice on "all of the possible avenues" and "do not rule any out".

Speaking to reporters outside Parliament on Monday, Ms Swinson said: "As Liberal Democrats we will take any action required to make sure that that voice of Remain is represented in those debates.

"We are taking legal advice and we will pursue legal avenues if ITV do not change their format.

"Because it is so important that millions of Remainers can make sure their voice is represented, that it is a fair debate between the different options on offer, and that for the girls and young women across our country they see that women can be political leaders and prime ministers too."

A spokeswoman for the party said a legal team has been instructed to be prepared to launch legal action if ITV does not change its decision "quickly".

"Because I stand as a candidate to be prime minister.

"And as the leader of the biggest and strongest party of Remain, it is a nonsense to suggest that these debates should go ahead, Leave versus Leave, with no voice for Remain whatsoever.

"The voice of the millions of people who voted to remain, who want to stop Brexit and stay in the European Union, must be heard in those leaders' debates."

.@joswinson is the only women candidate to be Prime Minister, the only one campaigning to stop Brexit and the only one who has the plan to build a #BrighterFuture.

Add your name if you want to see a Remainer on stage at the TV debates. #DebateHerhttps://t.co/qmtaudD4ez

She said it is so important that in 2019 Parliament and politics "properly represents the country that we are here to serve", and recalled a previous televised debate which featured the leaders of the Lib Dems, Labour and Conservatives.

"In 2010 when our poll ratings were very similar to the ones that we have now, Gordon Brown, David Cameron and Nick Clegg were the leaders in those debates.

"Nine years on, as I say, when we're on similar poll ratings, I should be in those debates with Boris Johnson and Jeremy Corbyn.

"And frankly, if they are refusing to debate me, then it looks like they are sexist or they are scared or possibly both," she said.

Ms Swinson said they have had meetings with ITV, adding: "We will be following up with letters and legal action, and we will of course keep you informed about those steps as those actions progress."

ITV has said it was already scheduling a separate live debate to include seven party leaders, as well as the head-to-head.

And the broadcaster said Ms Swinson and other party leaders have been invited to take part in a live interview programme later on, during the night of the Corbyn-Johnson debate.

"This involves a wide range of programming, including a live debate programme in which seven party leaders are invited to take part, as well as a live debate between the Labour and Conservative leaders."