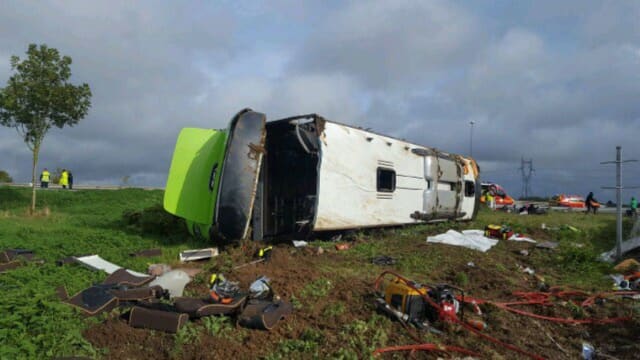 A bus travelling from Paris to London has crashed in northern France leaving 29 people injured, including five people with serious injuries.

A FlixBus coach tipped over around 11 am GMT after the incident on the A1 motorway in northern France on Sunday.

The coach, operated by a regional partner for the German transport firm, was carrying 32 passengers when it tipped over in the rain and overturned in the Somme region, close to the village of Ablaincourt-Pressoir.

FlixBus have said five people were seriously hurt and other passengers have been treated in local hospitals.

Pictures of the incident show the bus on its side on a grass verge close to the road with a broken front windshield and a large hole in the front right side.

According to local police, 10 British citizens were on board as well as citizens of nine other nations.

Two 20-year-olds from Northern Ireland, Jamie Kerr and Gemma Given, were treated for head and hand injuries.

Mr Kerr’s father John Kerr told the BBC the trip had been “a pretty traumatic end to a Halloween weekend”.

He said the couple were offered a bus back to the UK but decided to make their own way home.

“I feel a bit more could have been done for them,” he said.

“They’ll learn a lot from all of this, but I’m expecting an emotional response when they get home and it all hits them.”

A FlixBus spokesperson told PA: “FlixBus regrets to confirm that, according to the most-recent information available, a long-distance bus on its scheduled route from Paris to London from our local partner operating on behalf of FlixBus was involved in an accident.

“There were 32 passengers and one bus driver on board.

“Injured passengers were taken to local hospitals; those not requiring medical attention are being taken care of by local authorities.

“FlixBus is in close contact with the relevant authorities in order to determine the exact cause of the accident and to ensure all passengers receive appropriate support.

“An emergency phone number is available for the passengers and their relatives.”

The Foreign and Commonwealth Office (FCO) said they were aware of the incident.

An FCO spokesperson said: “We are in contact with the French authorities following a road traffic accident in France, and will do all we can to assist any British people who need our help.”