Lib Dems didn’t get everything right during coalition – Jo Swinson 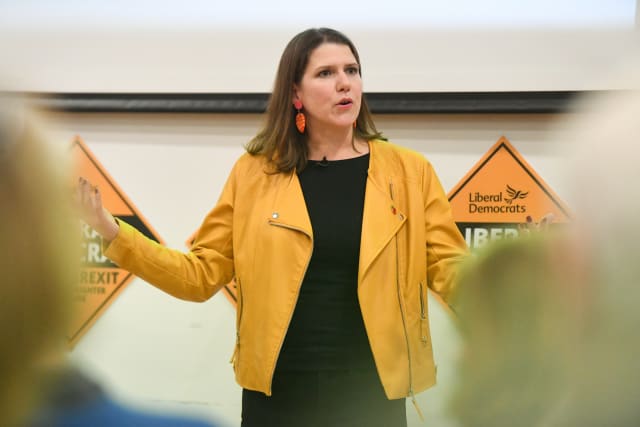 Jo Swinson has acknowledged the Liberal Democrats “didn’t get everything right” in supporting austerity in the Tory-led coalition as she attempts to win over Remain-backing Labour supporters.

She launched the General Election campaign of former Tory minister Sam Gyimah on Saturday as he tries to win the marginal London constituency of Kensington for the Lib Dems.

The area has some of the highest levels of inequality in the nation and was the centre of intense scrutiny of austerity over the Grenfell Tower atrocity, which killed 72 people.

Ms Swinson, who was a junior minister in the Tory-led coalition, has come under fire for being complicit in austerity and the hiking of university tuition fees.

She defended the Lib Dems’ role in the coalition led by David Cameron as having secured rights such as same-sex marriage and taking people on low incomes out of paying income tax.

But she told the PA news agency: “We didn’t get everything right.

“I’ve been upfront about that and we need to learn from the things we didn’t get right. The bedroom tax would be an example of that.

“But I’m confident that we have learned from that experience.”

Ms Swinson voted for reducing benefits including supporting the “bedroom tax” and backed raising England’s undergraduate tuition fees to up to £9,000 per year.

Mr Gyimah, who currently represents the East Surrey constituency, joined the Lib Dems in September and struck out at the Tories for becoming the “hard Brexit party” after he was exiled by Boris Johnson over his no-deal opposition.

He was unveiled at the Lib Dem conference that saw them confirm support for revoking Article 50 to prevent Brexit over holding a second referendum, a move opponents have criticised as undemocratic.

But the party has been riding high in the polls, with its unequivocally pro-Remain message being seen as far clearer than Labour’s.

Jeremy Corbyn is campaigning on the platform of wanting to broker a new deal with Brussels before putting it back to the people along with an option to Remain in a referendum.

Mr Gyimah was one of the 21 Conservative MPs exiled by the Prime Minister over their rebellion to push through legislation to prevent a no-deal Brexit.

He faces an uphill battle to seize Kensington but the Lib Dems hope their success in the European Parliament vote will follow them into the General Election.

Labour’s Emma Dent Coad snatched Kensington from the Tories in the 2017 election by just 20 votes.

Both Labour and the Conservatives shared 42% of the vote, while the Lib Dems trailed with 12%.

But there are hopes that Mr Gyimah could seize the seat as a Remain-backing candidate with moderate conservative values.