Harry meets Paralympic hopefuls in Tokyo ahead of rugby final 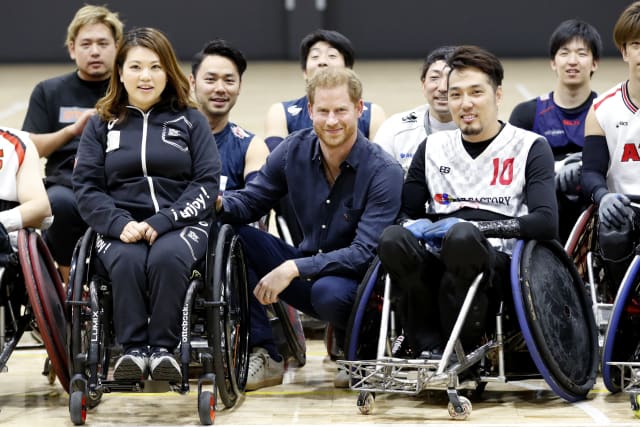 The Duke of Sussex warmed up for the Rugby World Cup final at a training session for would-be Japanese Paralympians – and discovered that one or two of them were rooting for England’s opponents.

“Who are you guys supporting tonight?”, he asked a group of wheelchair rugby players at Tokyo’s new Para Arena for disabled athletes.

Back came a chorus of “England” before Tomoshige Kabetani piped up: “South Africa!”

“I’ll have a word later,” joked Harry. “You might not get selected for the Paralympics!”

Tomoshige, 32, explained that South Africa had been Japan’s last opponents in the tournament, hence his support for the Springboks, before adding: “This year you became a father. We are so happy.”

At which point the whole group gave the duke a round of applause.

Dressed in a casual shirt, blue chinos and trainers, Harry was shown around by power-lifter Eri Yamamoto, 36, who hopes to compete at next summer’s Tokyo Paralympics.

Having been at the 2012 London Paralympics as part of the Japanese support team, she told Harry that she hopes that Tokyo 2020 can be a worthy successor.

The duke explained how 2012 had transformed public interest in disabled sport – “it’s just got bigger and bigger,” he said – and he wished Tokyo well for next year.

Harry also met a group of schoolchildren including Shiyo Sudo, 12, who said that he was “very handsome” and pointed at his wedding ring.

“I’m married!” Harry said proudly, holding up his left hand to cheers and hoots of laughter.