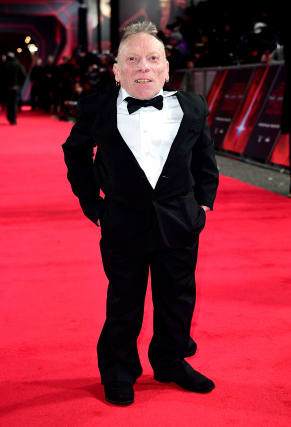 Star Wars actor Jimmy Vee has spoken of his delight at getting to play the charismatic droid R2-D2, ahead of the upcoming release of The Rise Of Skywalker.

Vee has filled the shoes of the late Kenny Baker in the three sequels, which will conclude when the JJ Abrams-directed blockbuster hits cinemas on December 19.

The Scottish actor said he does not know what is next for the franchise, but he may be ready to step back from his movie career and leave R2-D2 – or “the can” – behind.

Vee told the PA news agency: “Now it’s coming to an end we don’t know how it’s going to go.

“I’m only glad to be the guy who stepped into the shoes of Kenny Baker.

“Whatever way it goes from now or in the future, in the words of William Wallace, they may take away my can but they’ll never take away my glory.”

Vee was speaking at a preview of a new robot-themed exhibition at V&A Dundee, featuring an original R2-D2 prop.

After starting his career as a stunt double, Vee’s credits now also include Rocketman, Doctor Who and Harry Potter.

The 60-year-old, from Shotts, North Lanarkshire, said: “I don’t think there’s much left for me to do now.

“I thought that (Star Wars) would be the end of it, and then I did Rocketman.

“It seems that I’ve done everything. What I need now, I think, is to go and sit back in the sunshine and say that’s it, I’ve had enough.”

Star Wars: The Rise Of Skywalker will bring to an end the nine-part saga that began with the original Star Wars in 1977.

Fans of the franchise are expected to flock to view R2-D2 when Hello, Robot: Design Between Human And Machine opens at V&A Dundee on Saturday.

Museum director Philip Long said: “The exhibition looks at robotics in our culture and I think one of the highlights for those coming here will be to see one of the R2-D2s from the Star Wars movies.

“We are especially pleased to have Jimmy Vee with us. The exhibition is all about the relationship between robotics and human beings, and if there is anyone who knows what it is like to be a robot, it is Jimmy Vee.”