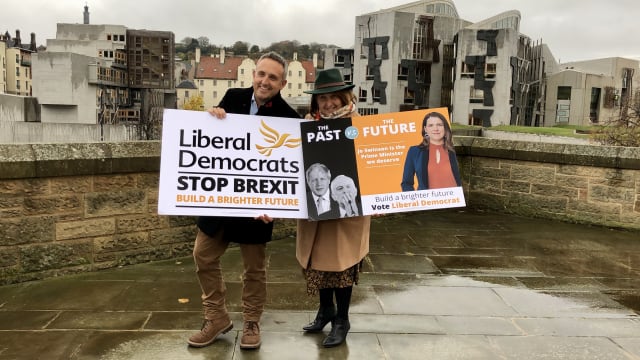 People in pubs and on the street are talking about Jo Swinson and believe she is the future, according to the Scottish Liberal Democrats.

Christine Jardine MP unveiled posters emblazoned with the slogan “Jo Swinson is the Prime Minister we deserve” in Edinburgh and pledged the party would “stop Brexit and stop independence”.

Ms Jardine was joined at the launch by Lib Dem MSP Alex Cole-Hamilton, who said they were mounting a “positive, inclusive campaign”.

He said they are appealing to voters who are “sick and tired of the Conservatives and the Labour Party who are, frankly, stuck in the past”.

“The reason we will do that is because we want to build a better, brighter future – one in which we tackle climate change and we tackle the inequalities in our society that mean not everybody gets to fulfil their potential.

“If you listen to people in pubs, shops and on the streets in this country now, the person they are talking about is Jo Swinson.

“She’s building consensus – she’s brought MPs from the Conservative Party and the Labour Party to the Liberal Democrats.”

Ms Jardine, who is hoping to regain her Edinburgh West seat, added: “Jo Swinson is a politician who people recognise is going places.

“She has ambition for this country and we all want to see it fulfilled.”