Trump: It isn’t fair UK doesn’t want to take back IS terrorists 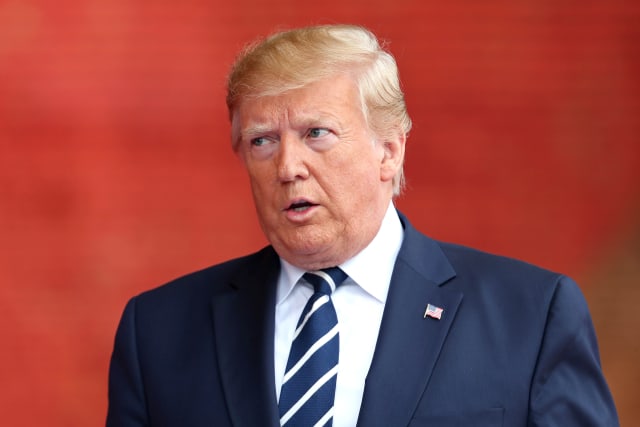 Donald Trump has taken aim at the UK, saying it “isn’t fair” the Government doesn’t want to take back British terrorists captured by the US.

Mr Trump said the United States had captured terrorists from the UK and offered to give them back so they could face justice in their home country.

In a radio interview on Thursday with Brexit Party leader Nigel Farage on LBC, Mr Trump said the US was “stuck with it”.

“We offered to give the ones from UK back to UK and they don’t want them,” Mr Trump said.

“So, as usual the United States gets stuck with it and we’re handling it a certain way, so we’re watching it very carefully.”

During the interview Mr Trump spoke about two British men suspected of being part of the so-called Islamic State (IS) group dubbed The Beatles because of their English accents.

Alexanda Kotey and El Shafee Elsheikh had been moved by American security services to an “undisclosed location” amid fears they could escape custody as Turkish troops invaded the Syrian Kurdish-held region of north-eastern Syria.

“We captured them, we’ve got them, The Beatles, we have you know, we have two of The Beatles, they were the worst and they came from your territory and you guys, possibly incredibly smart but you know, maybe not, you didn’t want to take them back,” he said.

The pair, who were raised in the UK but have since been stripped of their British citizenship, are among thousands of suspected IS fighters, including others from Britain, who have been held in camps in Syria.

Mr Farage asked the US president if the UK could expect his government to send terrorists back in future.

Mr Trump said: “We would if you’d take them, but you guys you don’t want them back”.

“Nobody wants them, you know, they say ‘hey let the US take care of them, they take care of everything else, let them take care’.

Mr Trump said he had made the offer to France and Germany as well.

“They all were so happy when we captured them, I said good, now you can take them back and try them and I think maybe they didn’t hear the statement, they didn’t want to hear it,” he added.