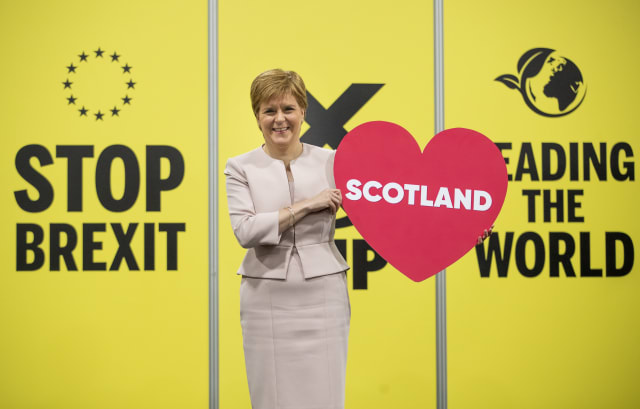 Scotland is facing the most important election for decades, Nicola Sturgeon said, as she insisted the result of the December 12 poll will determine the country’s future “for a long time to come”.

The Scottish First Minister declared a vote for the SNP would be a “demand” for the “right to choose our own future”, as well as a vote to “boot out Boris Johnson”.

The day after MPs voted in favour of the first December general election for almost a century, the SNP leader hit the campaign trail in Stirling.

The seat is being targeted by the SNP, with MEP Alyn Smith hoping to win it back for the party from the Scottish Conservatives.

Ms Sturgeon told the PA news agency: “It’s the most important election Scotland has had for decades, it will determine the future direction of our country for a long time to come.

“A vote for the SNP is a vote to stop Brexit.

“No matter how you voted on Brexit, it’s a mess and the only way to end the mess is to stop Brexit.

“Secondly, a vote for the SNP is a vote to put Scotland’s future into Scotland’s hands and demand the right to choose our own future, not have that determined for us by the likes of Boris Johnson.

“If we want to build a better, brighter future for Scotland in place of the broken Westminster system, then voting SNP is the way to achieve that.”

While opposition parties are likely to use the election campaign to attack the SNP’s record in Government in Scotland, Ms Sturgeon argued the poll is “about the direction we want our country to take and, fundamentally, who decides the direction Scotland takes”.

She said: “I want to stop Brexit, it’s a mess and it will damage the country for many generations to come.

“But we need to make sure in Scotland that we never again find ourselves in the position of having the future of our country determined by a broken Westminster system and by right-wing Tory politicians like Boris Johnson.

“The only way to do that is to have the ability to choose our own future and to choose independence.”

If the ballot results in another hung parliament, Ms Sturgeon said there would be “no formal coalitions” in which the SNP would prop-up a minority administration.

But she made clear her party would seek to be “part of a progressive alternative to the Tories”.

Ms Sturgeon added: “Scotland is pivotal in this election, we can deprive Boris Johnson of a majority and in every single Tory-held seat in Scotland it is the SNP that’s the challenger.

“So if you want to make sure you can stop Brexit and boot out Boris Johnson, voting SNP is the way to do that.

“The SNP will always try to work as part of a progressive alternative to the Tories, but the key thing is that the last few years have told us is that it’s the Westminster system that’s broken.

“Whoever is in Downing Street, Scotland’s interests are ignored and we need to be in charge of our own future to make sure that doesn’t happen.”