Political parties gear up for first December election since 1923 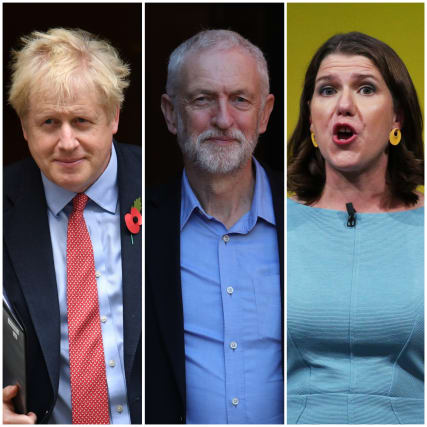 Political parties are gearing up for the first December general election in almost a century, after MPs backed Boris Johnson’s fourth attempt to go to the polls.

The Prime Minister has said he is prepared for a “tough” battle, while shadow chancellor John McDonnell said he thought Labour would win a majority.

Liberal Democrat leader Jo Swinson insisted the campaign was not a two-horse race between Mr Johnson and Jeremy Corbyn, and that she was standing as a candidate to be prime minister.

The Government’s one-page Bill enabling the election to be held on December 12 will be considered by the House of Lords on Wednesday, but it is unlikely to be held up in the unelected upper chamber.

Once it receives the royal assent, it will pave the way for Parliament to be dissolved on November 6.

The parties are likely to formally kick off their campaigns from Thursday.

Mr Johnson cautioned against any complacency as he addressed his MPs at Westminster on Tuesday evening after his Bill cleared the Commons by 438 votes to 20.

“It’s time for the country to come together, get Brexit done and go forward. It’ll be a tough election and we are going to do the best we can,” he said.

However Labour struck a more optimistic tone, with Mr McDonnell telling BBC Radio 4’s Today programme: “We’re going to have a real go at this and I think we’ll win.

“I think we’ll have a majority government by Christmas, so I can’t think of a better Christmas present basically.”

Lib Dem Ms Swinson said said her party’s “stop Brexit” message was resonating with Remainers, and claimed neither Mr Johnson nor Mr Corbyn were fit to be prime minister.

“Our country deserves a better choice, and I am standing as candidate to be prime minister.”

Asked if she would be prepared to enter into some kind of informal deal with the Tories or Labour without those two men at the helm, she said they are parties that want to “force through Brexit on our country”.

She added: “It’s going to be bad for our country. And they both have that shared vision for the future.

“The Liberal Democrats have a different positive alternative vision for the future.”

Health Secretary Matt Hancock said the Tories would offer people a “positive, optimistic, one-nation agenda” which he thinks can bring the country together.

Mr Johnson – who marks 100 days in office on Thursday – is aiming to restore the Tories’ Commons majority lost by Theresa May in 2017 so he can finally end three years of deadlock and get his Brexit deal through Parliament.

However, there are risks in going to the country having failed to deliver on his promise to deliver Brexit by October 31 “do or die”, and with Nigel Farage’s Brexit Party denouncing his deal with Brussels.

A pre-Christmas poll means voter turnout is likely to be depressed on the dark December nights, while the Conservatives may also suffer at the ballot box if the NHS is hit by a winter flu crisis.

Some Labour MPs are deeply unhappy at the prospect fearing that they are heading for another election defeat.

Only 127 of the party’s 244 MPs voted for the election while more than 50 signed an amendment calling for the poll to be delayed until May 2020.