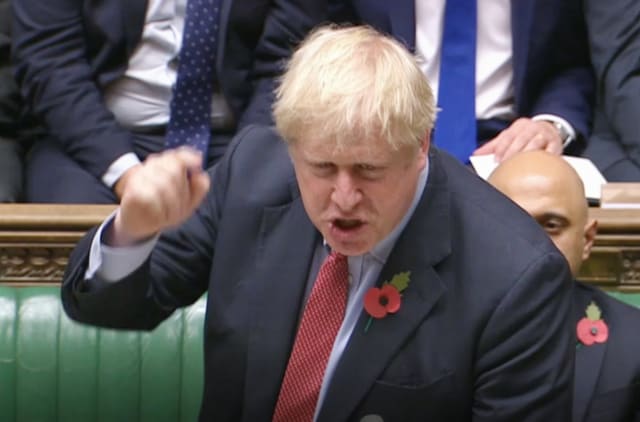 Boris Johnson has accused MPs of trying to delay Brexit "forever" in a combative speech after Jeremy Corbyn said Labour would back a general election.

The Prime Minister said a "new and revitalised" Parliament was needed to take Britain out of the European Union as he introduced legislation for a poll on December 12.

Mr Johnson took aim at Mr Corbyn's previous opposition to an election, and claimed Labour was not interested in delivering Brexit.

"All they want to do is procrastinate," he told the Commons.

He added: "They just want to spin it out forever, until the 12th of never. And when the 12th of never eventually comes around, they'll devise one of their complicated parliamentary procedures and move a motion for a further delay and a further extension then."

The PM said an election was needed because delaying Brexit is "seriously damaging to the national interest", while a fresh Parliament would have a "new mandate to deliver on the will of the people and get Brexit done".

Mr Johnson has put forward a short Bill which sets aside the Fixed-Term Parliaments Act (FTPA) and enables a general election on December 12.

Mr Corbyn told his shadow cabinet he would back an early election now a no-deal Brexit was "off the table".

His announcement came after Mr Johnson formally accepted a Brexit extension, definitively breaking his "do or die" commitment to leave the EU by October 31.

The success of the PM's election move requires the backing of only a simple majority of MPs rather than the two-thirds "super majority" which he failed three times to win under the FTPA.

But the Liberal Democrats and the SNP are reluctant to accept Mr Johnson's date – fearing it allows time to bring the Withdrawal Agreement Bill to implement the PM's new Brexit deal before MPs ahead of the start of the campaign.

They have previously signalled support for a poll on December 9, but could put forward a proposal for an election on December 11 – which the Government is likely to accept.

The PM's official spokesman said a December 9 vote would not be "logistically possible" but that other proposed compromise dates would be considered by the Government.

However, Mr Corbyn's move does not mean a December election is certain.

MPs voted in favour of a proposal – tabled by Labour's Stella Creasy – which makes it easier for them to put forward amendments on the Government's Bill for an early general election.

Mr Corbyn confirmed he would back votes for 16 and 17-year-olds and EU citizens with settled status if amendments seeking to make such changes are selected.

Downing Street said votes for EU nationals could cause "administrative chaos" while allowing 16 and 17-year-olds to take part would be "administratively impossible" to deliver.

"There are long-standing conventions that election laws should only be changed after appropriate consultation," the Prime Minister's spokesman said.

"The Electoral Commission warns against changing electoral laws less than six months before an election."

Flanked by members of his shadow cabinet, an energised Mr Corbyn did not rule out backing any changes, telling reporters outside Labour's London HQ: "There will be a parliamentary process this afternoon."

But he added: "We are going out there to fight an election campaign and I can't wait to get out there on the streets."

However, some of his MPs have ruled out backing a general election on Tuesday, including Anna Turley and Kevan Jones, while Barry Sheerman said it was "sheer madness" to hold a December poll.