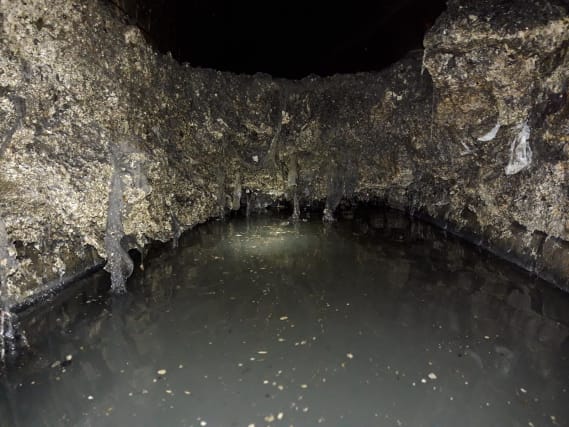 A 40-tonne fatberg the size of a double-decker bus has been cleared from a London sewer by Thames Water engineers who pulled out some of it by hand.

The mass of fat, grease and other materials that weighed the same as three red buses, was discovered earlier this year clogging up an underground sewer in Greenwich, the water company said.

It took three weeks for Thames Water workers to clear the "disgusting" blockage which at points took up 80% of the sewer's capacity, using a combination of high-powered water jets to blast it loose and removing debris by hand.

Fatbergs are formed when fat, oil and grease are poured down sinks and drains and combine with items that should not be flushed down the toilet, such as unflushable wet wipes, nappies and cotton buds.

Thames Water's network protection team has been visiting food establishments in the area, to make sure they are not putting fat, grease and oil down their sinks and that fat traps are installed and working.

Matt Rimmer, Thames Water's head of waste networks, said: "This was a massive and disgusting blockage that took a great deal of effort and teamwork to clear and get the sewer working well again.

"I'm happy that our team was able to get down and work hard to quickly to clear the fatberg before it could cause problems for our customers and the environment.

"We'd urge everyone to help fight the fatberg by only flushing the 3Ps, pee, poo and paper, as well as disposing of fat and oils in the bin, not the sink."