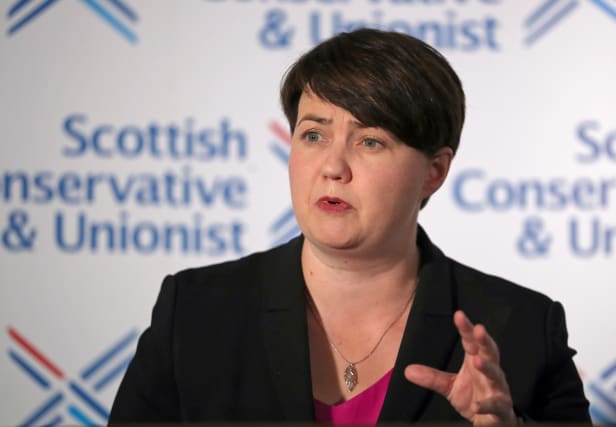 Former Scottish Conservative leader Ruth Davidson has said she conducted “due diligence” before taking on a paid job with a lobbying firm.

The MSP has faced calls to resign after it emerged she has been appointed as a senior adviser to PR firm Tulchan Communications, amidst claims of an alleged conflict of interest.

Ms Davidson has urged any MSP who feels there is “any element of wrongdoing under parliamentary rules” to refer her to the standards commissioner, saying she is unable to refer herself.

The Edinburgh Central MSP said she was also happy to give up any money until the referral is resolved, and to step down from the Scottish Parliament’s Corporate Body during the period of referral if its members want her to.

She said: “Since my election in 2011, I have worked hard to make a positive contribution not just to Scottish Politics but also to the Scottish Parliament. I take my responsibilities to Holyrood seriously.

“That is why, before even considering a business advisory role on a contractor basis, I conducted due diligence – both on the company, Tulchan, and by sitting down with the parliament’s standards clerks to go through the Code of Conduct for MSPs, in detail, to ensure there was no conflict.

“Since the announcement of the role, questions have arisen, despite legal and contractual assurances it involves no lobbying or advice on parliamentary strategy. Some of these questions have been the usual party political point scoring, but some have been genuine.

“To address that, I spoke to standards officials again yesterday to examine what further reassurances I could make to demonstrate I was working well within my responsibilities as a member.

“I asked for guidance on whether the standards commissioner could be asked to make a ruling. I was informed that because any referral must contain the area where a transgression is believed to have occurred, and evidence to support the claim, I would be unable to refer myself as there is no such transgression to report.

“Therefore, I would ask any member who believes there is any element of wrongdoing under parliamentary rules to make such a referral. I will co-operate fully.

“Further to that, I am also happy to cede any monies until the referral is resolved and further happy to recuse myself from the Scottish Parliament’s Corporate Body during the period of referral, should SPCB members wish me to do so.”

Ms Davidson resigned as her party’s leader in August after admitting she was “hopelessly conflicted over Brexit” – in addition to personal changes following the birth of son Finn last year.

Labour, SNP, Green and Liberal Democrat MSPs want Ms Davidson to stand down over the alleged conflict of interest despite a Tory spokesman arguing the role “is well within all parliamentary and industry rules”.

Ms Davidson said that the role at Tulchan is about talking to business to encourage them to look beyond simply their returns to shareholders and to consider their employment, environmental, supply chain and equality practices.

She added: “There are some amazing examples of good practice going on and I look forward to helping companies improve their stakeholder value.”