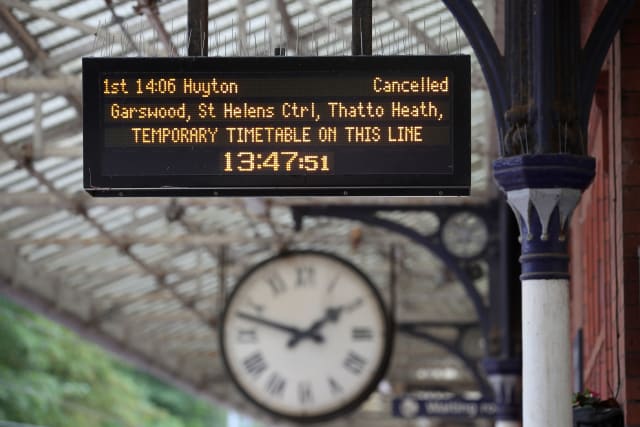 Department for Transport (DfT) data shows that Britain’s train companies paid out £79 million in total during the 2018/19 financial year, down 2.1% on the previous 12 months.

Over the same period, the rail industry’s then-official measure of punctuality reached a 14-year low.

Just 86.3% of trains reached their destination within 10 minutes of the schedule for long-distance services or five minutes for short-distance journeys – the public performance measure (PPM) – down 1.5 percentage points on 2017/18.

Most train companies require passenger to submit a claim for compensation when services are delayed, and the amount payable depends on the operator, the length of delay and the ticket held.

That means the total compensation paid and the overall punctuality performance of the railways are not proportionally linked, as one delayed long-distance train could result in larger payouts than several disrupted commuter trains.

Although compensation payouts fell in the past 12 months, they were still 76% higher than in 2015/16.

A recent report by independent watchdog Transport Focus found that as much as £100 million of compensation went unclaimed in 2017/18 as just 35% of passengers submitted claims.

The organisation’s director, David Sidebottom, said: “The rail industry should introduce more automated compensation for delays and cancellations, and ensure every eligible passenger knows how to claim so that they get the money they are entitled to.

“To make their voice heard passengers must claim every time and make delay pay.”

Jacqueline Starr, chief operating officer of industry body the Rail Delivery Group, said: “Providing a great service for our customers is at the heart of everything we do and we are sorry when we fall short.

“Alongside unprecedented investment to improve journeys, including the roll-out of 7,000 new train carriages, operators have driven up the amount of compensation paid by 75% over the last three years by making claims quicker and easier.”

Passengers travelling on London North Eastern Railway and its predecessor, Virgin Trains East Coast, were paid the most compensation in 2018/19 at £18.4 million.

Operators whose services were crippled during the chaotic launch of new timetables in May 2018 bucked the overall trend by increasing their payouts.

Northern paid out £1.6 million compared with £0.6 million during the previous 12 months, while Govia Thameslink Railway’s annual payments increased from £4.2 million to £8.0 million.

Additional payments were also made due to the extraordinary nature of the timetable disruption.

A DfT spokesman said: “Our absolute priority is ensuring trains run on time and passengers have the reliable services they deserve. However, it is absolutely right that, when things go wrong, passengers are compensated fairly and quickly.”

He added that operators are being encouraged to introduce simpler claims systems.

On April 1, PPM was replaced by the “on time” standard for measuring the punctuality performance of the network.

That means trains are only considered to be punctual if they are within a minute of the schedule, and they are recorded at every stop rather than just the final destination.

First set of measurements from Solar Orbiter beamed back to Earth