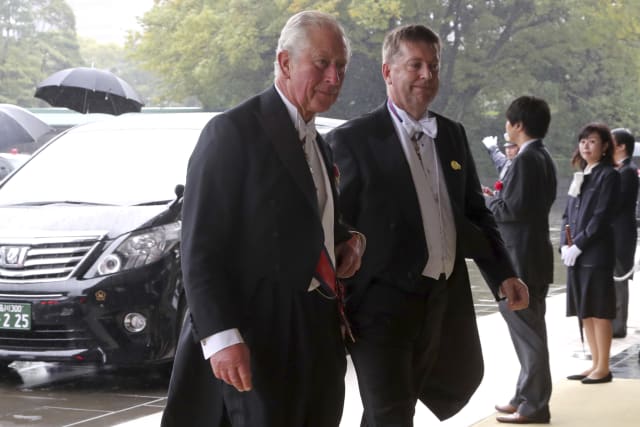 The Prince of Wales witnessed a ritual-laden, centuries-old ceremony as Japan’s Emperor Naruhito proclaimed his ascension to the throne.

Charles was among scores of foreign dignitaries attending the elaborate event at the Imperial Palace in Tokyo on Tuesday, marking the high point of several formal ceremonies declaring Naruhito Japan’s 126th emperor.

The two-day visit was undertaken on behalf of the Queen at the request of the UK Government and will also include a day of engagements to celebrate British-Japanese connections, said Clarence House.

Emperor Naruhito, 59, acceded to the Chrysanthemum Throne in May after his father, Emperor Akihito, became the first Japanese monarch in more than two centuries to abdicate.

But his ascension has only now been formalised after the traditional ceremony on Tuesday afternoon, which lasted around 30 minutes in front of some 2,000 distinguished guests and dignitaries.

As the ceremony began, purple curtains were drawn back to reveal Naruhito and his wife, Empress Masako, 55, dressed in elaborate traditional costumes sitting on two thrones.

Conducted largely in silence, the ritual was held with a sacred sword and jewel placed alongside Naruhito, representing ancient imperial traditions dating back to the 7th century.

The ceremonial procedures are largely to allow the government to showcase the monarchy to win public support and preserve the country’s cultural heritage, historians say.

It comes as Japan, which is currently hosting the Rugby World Cup, recovers from the devastating effects of Typhoon Hagibis, which left around 80 people dead.

A celebration parade was pushed back to November 10 after the deadly storm caused extensive damage.

Charles is due to attend a three-and-a-half-hour court banquet held by the emperor on Tuesday evening, followed by a dinner on Wednesday hosted by Japanese Prime Minister Shinzo Abe.

It is the prince’s fifth visit to Japan, including his 1990 trip to attend the enthronement ceremony of Naruhito’s father, Emperor Akihito.

To mark the occasion, Mr Abe’s Cabinet is granting pardons to about 550,000 people convicted of petty crimes like traffic violations.

When Naruhito’s grandfather, Hirohito, died in 1989, more than 10 million people were pardoned, and 2.5 million were granted amnesties to celebrate Akihito’s enthronement.