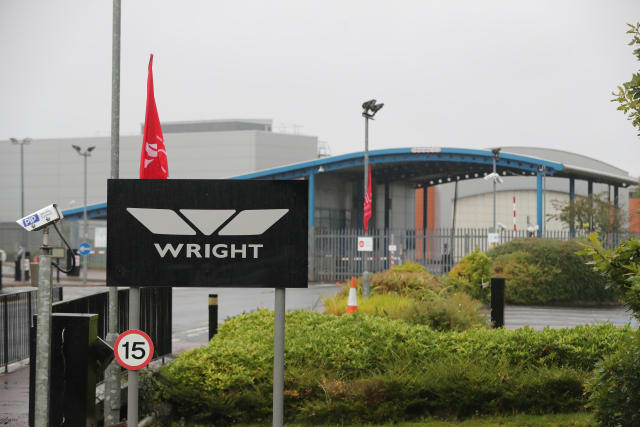 A trade union has urged that hundreds of jobs are saved following official confirmation of the sale of troubled bus builder Wrightbus.

Wrightbus was placed into administration last month with 1,200 workers being made redundant.

Following a period of uncertainty during which workers campaigned to save the plant, it emerged that Bamford was in place as a buyer.

The deal to buy the business and assets was confirmed on Tuesday.

In a statement, administrators Deloitte said Bamford is currently determining the size and composition of the workforce required for its future plans.

It also confirmed that the 60 staff retained by the joint administrators have transferred to Bamford Bus Company.

Mr Bamford will serve as executive chairman of Wrightbus, and Buta Atwal will become chief executive.

In a statement, Mr Atwal said recruitment will start in the coming weeks.

He said as the bus transportation industry looks to decarbonise, there is growing demand for market leaders in this field.

“We must now focus on that opportunity and work hard as a team to move forward and rebuild this great business,” he said.

“Recruitment will begin over the coming weeks and we are very excited about the prospect of recruiting a world-class calibre of people to the business.”

“This is a huge opportunity for NI industry and commerce and nothing must be put in its place to hinder it,” he said.

Unite regional officer for Wrightbus George Brash said the deal must result in the securing of hundreds of jobs.

“These acquisitions represent a huge vote of confidence in the workforce and in the future of Ballymena as a manufacturing centre,” he said.

“We need to see this decision followed up by a wider programme of public investment in Ballymena to lock in these jobs for the long-term future.

“Unite will engage with our members and with the new owners to ensure the greatest possible number of workers return to what they do best, building buses.

“This is a highly-skilled workforce and it is vital that Ballymena continues to grow as a hub for cutting-edge bus manufacturing.”