Rare Mickey Mouse masks to be sold at auction 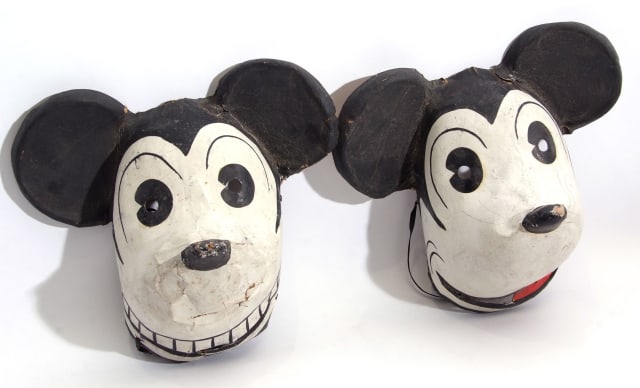 A pair of Mickey Mouse masks that were made in Germany at a time when Hitler’s Nazi regime was disparaging the Disney character are to be sold at auction.

The rare 1930s papier mache masks were made under licence from the Walt Disney company and each carries a stamp inside the mask stating this.

They are to be sold at Keys Auctioneers and Valuers in Aylsham in Norfolk later this month.

David Broom, director at Keys, said: “These are extremely rare, given the combination of being very early on in the history of Mickey Mouse and Disney, and the fact that they were manufactured in Germany under licence.

“The rarity is increased by the fact that the Nazi regime of Adolf Hitler propagandised against Mickey Mouse, with one mid-1930s newspaper article stating, ‘Mickey Mouse is the most miserable ideal ever revealed.’

“There is virtually no auction history for these kind of masks, and so we have set a very conservative pre-sale estimate of £200-£300 – although we would not be at all surprised if they sold for very much more than that.”

The character’s public debut was in Steamboat Willie, which appeared in 1928 and was one of the first cartoons with synchronised sound.

The masks form part of a special Toys and Collectors Sale taking place at Keys auctioneers on October 30.