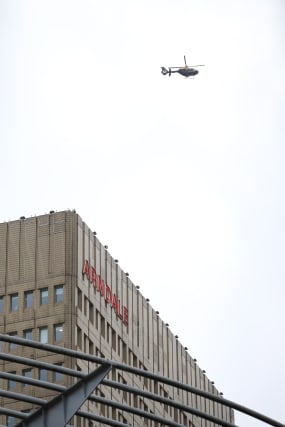 Police have been called to a security alert at Manchester’s Arndale Shopping Centre – just a week after two people were stabbed by a man in a random attack.

Footage circulated on social media showed a number of squad cars and an ambulance at the scene.

Greater Manchester Police said it had received reports of a man with a knife.

The force said: “Officers attended and a man has been arrested. He has been taken into custody for questioning.

“There are no reported injuries. There is not believed to be any wider threat to the community.”

It added there would be a continued police presence in the area to reassure the public, and asked anyone with any information to get in touch.

The North West Ambulance Service (NWAS) confirmed it had attended the scene.

The centre usually closes at 8pm on a Friday.

A NWAS spokeswoman said: “We were in attendance but there are no patients, there are no casualties so there is no more information at this time.”

Last Friday, a 40-year-old man sparked a terror alert when he launched an attack on passers-by on the ground floor of the centre.

A 59-year-old man received stab wounds to his hand and palm and a 19-year-old woman sustained wounds to her arm and armpit which required surgery.

Counter-terrorism officers are leading the investigation, although they have confirmed that so far no political, religious or ideological motivation has been uncovered.

Mayor of Manchester Andy Burnham said the day after the incident it appeared to be “more mental health-related than political or religious motivated”.

The shopping centre is just a few hundred yards from Manchester Arena, where 22 people were killed in May 2017 when Salman Abedi detonated a suicide bomb following an Ariana Grande concert.

In the city last New Year’s Eve, three people including a police officer were seriously injured when a 25-year-old man launched a knife attack on passers-by.

He was arrested on suspicion of attempted murder and will face trial in November.