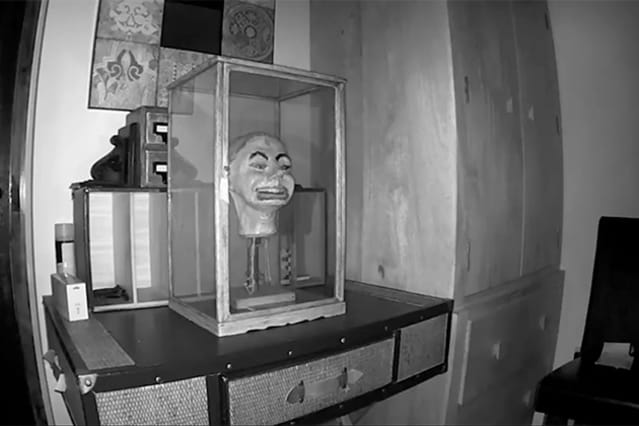 Haunting video footage has captured the creepy moment a ventriloquist doll locked in a glass box appears to blink and move its mouth.

The clip was filmed by spooked collector Michael Diamond, from Liverpool, who said he has "no explanation" for why 1940s dummy Mr Fritz appears to move on its own.

Filmed at his home during the early hours the 48-year-old's footage shows the glass door of the Second World War doll's cage swing open. Mr Fritz then appears to not only move its eyes - but move its mouth up and down.

Michael has insisted the video is not a stunt, and since capturing the apparent paranormal activity, has locked Mr Fritz away under a blanket and heavy chains.The father-of-two has owned the doll since July after being given it as a gift by a local militaria collector.

"Weird feeling in my stomach"

Michael admits he's freaked out by the footage, filmed by a camera he set up after noticing the dummy's latched box kept opening when left unattended.

"When I first watched the video back I had a weird feeling in my stomach", said entertainer.

"At least once or twice a week I noticed the door kept coming off its latch. I decided to set up the camera for fun just to see if anything would happen.

"When something actually did I got a weird feeling in my gut, it's hard to describe.

"I was really taken back by it and I did have a strange feeling.

"I wouldn't say I'm scared of Mr Fritz but I am wary of it.

Mr Fritz has a mysterious past but is understood to have been made by an American prisoner of war during the 1940s and has been owned by several collectors over the years.