Shoppers planning for Halloween rather than no-deal Brexit, figures suggest 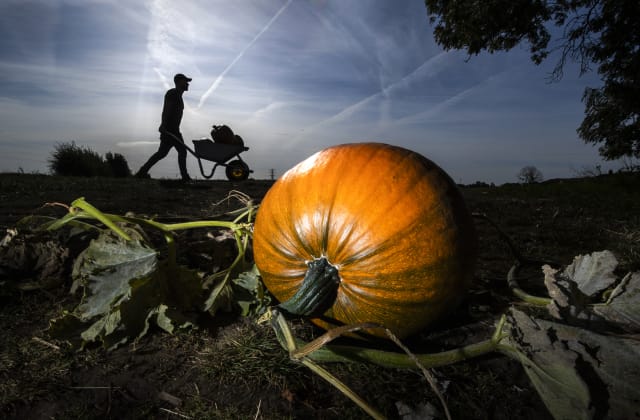 Households have already spent £1.5 million on pumpkins ahead of Halloween while predictions of stockpiling in preparation for a no-deal Brexit are yet to translate into consistent sales, supermarket figures show.

While pumpkin sales over the last 12 weeks are 29% higher than last year ahead of October 31, it appears that shoppers are “waiting to see how the next few weeks play out” in relation to stockpiling before Brexit, Kantar said.

Sales of dry pasta and healthcare products over the past four weeks were 9% and 7% higher than the same time last year, but those of canned products fell by 2% and frozen food by 1%.

Sainsbury’s increased its sales at the fastest rate since October 2018 to make it the only big four retailer to achieve growth.

Fraser McKevitt, head of retail and consumer insight at Kantar, said: “The grocery market seems to have finally edged out from under the shadow of 2018 and tough comparisons with the strong summer sales of last year.”

He added: “Well-documented concerns about the availability of popular products in the event of a no-deal Brexit have not yet translated into a consistent increase in purchasing.

“While a quarter of British consumers say they are considering stockpiling, it seems they are waiting to see how the next few weeks play out and we expect if they take any action it will be closer to the deadline if a chaotic trading situation looks increasingly likely.

“One event people are already planning for on October 31 is Halloween, spending a collective £1.5 million on pumpkins in the past 12 weeks. Those sales are 29% higher than at this point before Halloween last year and retailers should be taking note and aiming to capitalise on the celebration in the coming weeks.”

The proportion of sales on promotion increased for the first time in nearly four-and-a-half years this period to 32.3%, driven by Tesco’s “100 years of value” campaign and Sainsbury’s “Price Lockdown”.

Tesco, Asda and Morrisons all improved their performance compared with last month, but sales are still down year on year.

Morrisons remains behind the rest of the pack, declining by 1.8% with a market share of 9.9%.

Lidl and Aldi continue to gain share and now account for a combined 14% of UK grocery sales, 0.8% percentage points higher than last year and an increase worth nearly one billion pounds annually.

Figures from rival analysts Nielsen show sales growth momentum slowed to 1.7% in the last four weeks, the lowest for UK supermarkets in September in two years.

Mike Watkins, Nielsen’s UK head of retailer and business insight, said: “Against a backdrop of simmering economic uncertainties and the looming deadline of Brexit, as well as the UK having its lowest food inflation rate since April 2018, retailers are finding it more of a challenge to drive topline sales.

“Though many retailers are starting to introduce price cuts to help regain momentum after the unpredictable summer, it is evident that retailers will need to invest more heavily in promotional and advertising activity if they want to have the best chance of success in the run up to the seasonal shopping period. This should help lift consumer buying momentum and kick-start Christmas and seasonal shopping.”