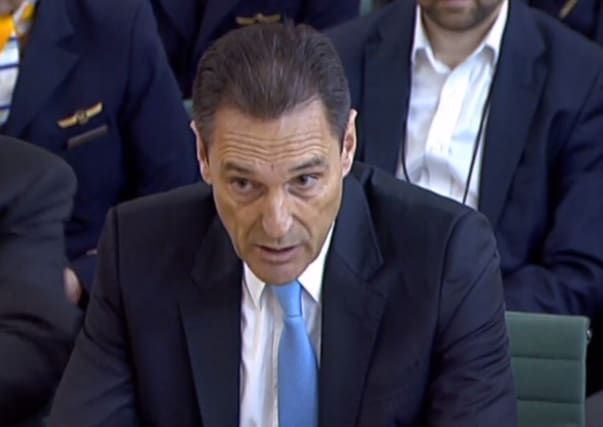 The former boss of Thomas Cook has been urged to repay bonuses following the company’s collapse.

Ex-chief executive Peter Fankhauser earned a bonus in 2017 which was worth more than half a million pounds in cash, a cross-party committee of MPs heard.

One of five former board members giving evidence to the Business, Energy and Industrial Strategy (BEIS) Committee, he explained how “deeply sorry we are that we couldn’t save this iconic brand”.

He apologised for the distress caused to millions of customers, suppliers who were “loyal to us throughout this time” and to employees who “worked extremely hard and tirelessly”.

But Labour MP Rachel Reeves, who chairs the committee, told him that his apology “rings rather hollow” unless he is willing to “put something back”.

His bonus could be “put to better purpose” such as redundancy payments for those who have lost their jobs or compensation for taxpayers, she added.

Mr Fankhauser responded that he will “consider what is right but I’m not going to decide that today”.

Ms Reeves told Mr Fankhauser they “do your company proud” and urged him to “go away and reflect on the huge salaries you’ve earned”.

The former chief executive told the hearing that he had no contact with UK ministers in the six days before Thomas Cook collapsed on Monday September 23.

“At no point in this process from Tuesday to Sunday did we have a Government minister on the phone,” he said.

However, ministers from Germany, Spain, Bulgaria, Turkey and Greece all made personal contact with him during the process, he said.

Asked why no-one from the BEIS department had been contacted, Mr Fankhauser said: “We were instructed and heavily advised by the transport ministry that they are the single point of contact.”

The committee was quick to call into question some of the accounting policies, including the decision to include a £2.5 billion “goodwill” value on the business in 2018.

MPs also asked the bosses why they based bonuses on profits that excluded one-off payments to pay for the restructuring. A total of £1.8 billion was written off as “exceptional” costs over eight years.

Ms Reeves said: “The proof of the pudding is somewhat in the eating and you failed to turn around this business. In the end you couldn’t just hide these numbers (exceptionals) forever, they caught up with you.”

Ms Reeves added: “You can point to as many successes as you like, but you have brought down a 178-year business with huge repercussions for customers, staff and taxpayers.