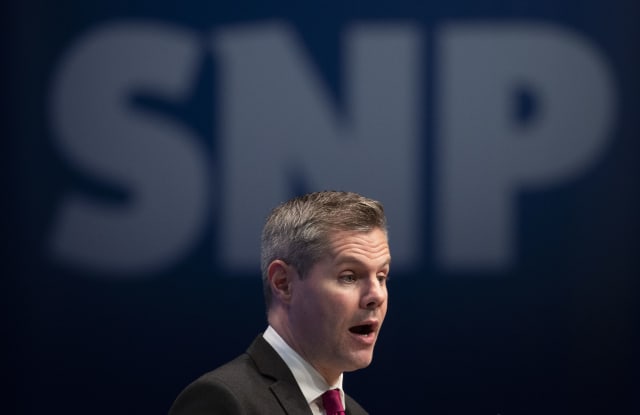 The new Scottish National Investment Bank is on track to open this time next year – despite the UK Government “stymieing” work to set up the new institution.

Scottish Finance Secretary Derek Mackay said the Treasury had so far failed to give the new bank permission to carry money over between financial years.

This could be done “at the stroke of a pen”, Mr Mackay said, as he urged the Treasury to “let us get on with the job.”

Mr Mackay also said the new institution would be contributing to the “transition to net-zero emissions” by supporting environmentally friendly initiatives.

But speaking at the SNP conference in Aberdeen, he said: “For the Scottish National Investment Bank to operate effectively, we require a Treasury permission to carry money between financial years, as you would expect of a bank.

“With the stroke of a pen, the Treasury could give that permission, resolve the issue, and allow our bank to progress, but so far they have refused.”

He called on the UK Government to “stop stymieing the building of the bank, and let us get on with the job”.

Despite that, he insisted that “come what may, the bank is on track to be open for business this time next year”.

The Finance Secretary also used his speech to stress that Scotland will be “at the forefront of the green energy revolution”.

Highlighting the links between the environment and the economy, Mr Mackay said that the transition to green energy would “create new jobs and new industries”.

“The Government will play our part and we will work with business to create the right environment for investment and a just transition that leaves no one behind.”

He also said his forthcoming budget for 2020-21 – which will be unveiled at Holyrood in December –  would have the issue of wellbeing at its centre.

“A budget that keeps us healthy, delivering hundreds of millions more for our health service. A budget that boosts our economy both now and in the future through the expansion of early learning and childcare.

“A budget that keeps our communities safe through increased funding for Police Scotland.

“And something that we should be proud of. This will be a budget that will take a decisive step towards reducing child poverty in Scotland with the introduction of a £10-a-week Scottish Child Payment.”

Mr Mackay said this would be achieved with the help of the Scottish Government’s “competitive, progressive tax system”.