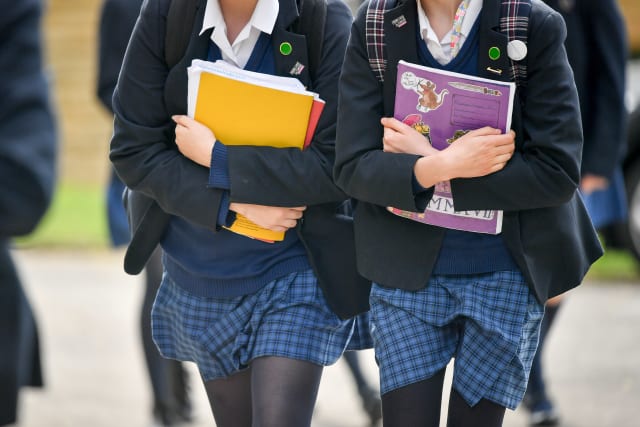 Children are being taken out of school to be home educated in as little as a day, according to an Ofsted report which says parents often see removing youngsters as the only option.

For many families, home education is not a preferred choice but a last resort amid a breakdown in relationships with schools, inspectors warn.

Special educational needs, medical and behavioural reasons are among the main motives for pupils being moved out of schools, Ofsted’s new paper says.

The inspectorate’s small-scale study, based on research with families, schools and councils in the East Midlands, looked at why children move to home education from secondary school.

Figures suggest that as at autumn last year, there were an estimated 58,000 children being educated at home, up around 27% on the previous year.

The report says its research found that parents “commonly viewed home education as the only option for them”.

Some school leaders reported that parents moved their child to home education to stop them being excluded and for some parents, the possibility of being fined or prosecuted for a child missing school triggered a move to home education, Ofsted says.

The report also says that some families had tried other schools, but they were unsuitable, or moves were unsuccessful and a few moved their child to home education despite not wanting to or being scared to do so.

In all of the cases in the research, there had been a breakdown in the relationship between schools and parents, the study says, with both having a different understanding of what is best for a child.

And it warns that the length of time for a child to be moved to home education can be very short.

“The period between a parent finding out about the possibility of home education and their child leaving school can be as little as one day,” inspectors said.

Schools and councils are “rarely” told about a child moving to home education before they are taken out of class, Ofsted says, with some schools only finding out it is a parent’s intention when a letter arrives.

“In extreme circumstances, moving a child to home education took as little as a day,” the report says.

“For example, after one parent heard about the possibility of home education, their child said: ‘Mum took me out of school the next day’.”

The report also looks at the issue of “off-rolling”, in which children – often those that are considered problematic or academically-poor – are unofficially removed from school rolls.

It says: “We cannot say for certain whether there were any cases of off-rolling.

“Our research did find examples that support other evidence that parents have been coerced into moving to home education.

“For example, one local authority had previously received letters from parents asking to move a child to home education that were written on school-headed paper but signed by parents.”

It adds: “Where inspections identify pressure being applied to parents to game the system in the interests of the school, directly or indirectly, we will consider this to be off-rolling.

“Unfortunately, our evidence suggests that letting children go can be an easy option for schools. Participants were aware that schools can also apply pressure to parents or children indirectly.”

Ms Spielman, said: “Home education is a legitimate parental choice and can be a positive decision when parents are well equipped to provide a good education.

“However, children should not be moved to home education simply to resolve difficulties in school.

“Schools, local authorities and parents need to work together before such a decision is made, to make sure that home education is genuinely in the interests of children and not just the best thing for schools or parents.

“It’s vital that parents are fully informed about the alternatives, and that they understand all the implications and costs of home educating their child.”

Julie McCulloch, director of policy at the Association of School and College Leaders, said: “Home education, when entered into for the right reasons, can be a positive choice for families. However, this report suggests that some children may be being educated at home for reasons that are not in their best interests.

“This is obviously concerning, particularly given that this particularly, according to the report, affects children with complex needs.”

She added: “School leaders work tirelessly with young people and their parents to ensure they receive a high quality education, and to support children who are having difficulties at school.

“However, cuts both to school budgets and to wider support services make it increasingly difficult for schools to provide the high-level support that some children need, which can lead to frustration and friction between schools and families.

“In addition, places at Pupil Referral Units or other alternative provision are woefully lacking in many areas, limiting the options available for supporting children with complex needs.”

Councillor Judith Blake, chair of the Local Government Association’s Children and Young People Board, said: “We share Ofsted’s concerns that an increasing number of families of children with complex needs are being encouraged to educate their children at home.

“We believe that the vast majority of children with Send would benefit from a mainstream education and are therefore pleased that Ofsted are raising awareness of this practise.

“However inspectors should go further and consider levels of mainstream inclusion when grading a school, while mainstream schools should be incentivised and rewarded to provide a more inclusive education environment for children with Send.”